In the Signs of the Zodiac Tweedledum and Tweedledee are GEMINI. They also take on the symbolism of twins. 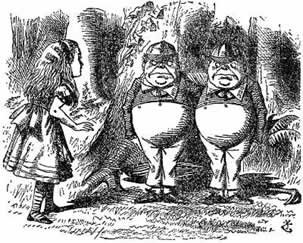 Tweedledum and Tweedledee
Agreed to have a battle;
For Tweedledum said Tweedledee
Had spoiled his nice new rattle.
Just then flew down a monstrous crow,
As black as a tar-barrel;
Which frightened both the heroes so,
They quite forgot their quarrel

[two aspects of the shaman with his rattle and the symbolism of the crow].