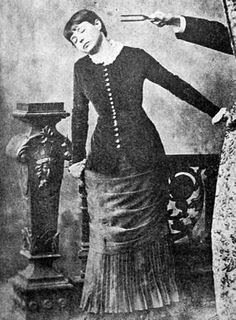 Caption "If the vibrations of the tuning fork are
abruptly arrested, the laryngeal sound is heard
immediately, the limbs fall into a state of resolution
and the patients at once become lethargic"

One of the ways in which spiritual experiences of various sorts can be obtained is via sound.

We have explained the principle of this under the heading of Listening to sound and music, but the underlying mechanism is that of the Resonant frequency of a thing – be it  a stone you want to levitate, or a person you want to send into trance, or a shaman you want to help go out of body.

We have included a paper as an observation that explains the principles of using sound – occasionally pulsed sound – in relation to ancient religious structures which goes into this subject in depth.

The tuning fork was used to establish the resonant frequency of the objects needing to be manipulated, and it was a sort of badge of office for those who did this.  As a symbol it was also used in cultures like the Picts, to show that a particular site was part of the sacred geometry of the area, but that the way it could be activated was by sound as opposed to sunlight. 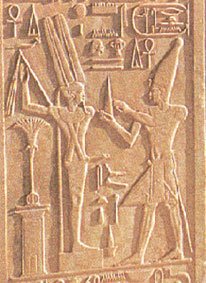 The Egyptians understood the principle of the manipulation of sound and the expert in this technology was shown with a sort of tuning fork hat.

There is some evidence that the Egyptians used sound as an aid to building the pyramids, levitation using sound being one possibility, [although  those with an ability for psychokinesis may also have played a part], but the pyramids themselves may be acoustic structures able to produce various spiritual experiences – they were certainly used for initiation ceremonies.

Using sound has its inherent dangers, as people and animals have various resonant frequencies, and the wrong frequencies at too high an intensity can kill or make them very ill.  On the other hand, sound can also heal.  The military of today have discovered the destructive effects of sound [and we have provided examples under the activity section] without having gained an understanding of the constructive possibilities.  We also have Biblical references to this same level of destruction: 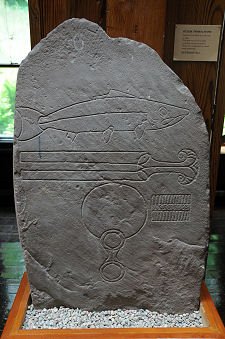 the tuning fork symbol on a Pictish stone

6 Now Jericho was straitly shut up because of the children of Israel: none went out, and none came in.
2 And the Lord said unto Joshua, See, I have given into thine hand Jericho, and the king thereof, and the mighty men of valour.
3 And ye shall compass the city, all ye men of war, and go round about the city once. Thus shalt thou do six days.
4 And seven priests shall bear before the ark seven trumpets of rams’ horns: and the seventh day ye shall compass the city seven times, and the priests shall blow with the trumpets.
5 And it shall come to pass, that when they make a long blast with the ram’s horn, and when ye hear the sound of the trumpet, all the people shall shout with a great shout; and the wall of the city shall fall down flat, and the people shall ascend up every man straight before him. 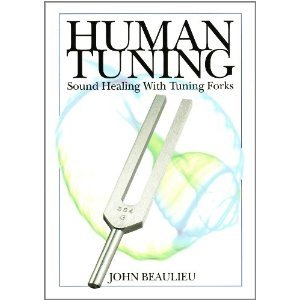 All energy is interchangeable – mechanical, electrical, etc  We give all these types of energy different names, but sound is mechanical energy which itself can be turned into heat, and vice versa.  Light and heat can be turned into mechanical energy and thus sound.  For example if the sun strikes a specific stone at a certain angle it may produce heat, but it has been known to produce sound.  Certain stones in Stonehenge hum at certain times of year.  Thus the tuning fork has a use when building a sacred geography of standing stones, round towers, brochs, wheelhouses and so on.

T C Lethbridge – A Step in the Dark

Now, if ……. the force -operating the divining-rod, and presumably the pendulum as well, is sound which can be measured on a dial, we are in the realm of exact science even if we are adding another dimension to it. We are also coming once again to the-ancient Greek belief that the whole universe is governed by harmonics. If this suggestion is anywhere hear the truth, then our divining-rod is some relation of the homely tuning-fork; our rates are inaudible notes obtained when some ray from us strikes an obstruction, and the double cones are the vibrations of some fixed rays similar to the twanging of a taut string. It all makes sense; but evidently our work is far from being completed. 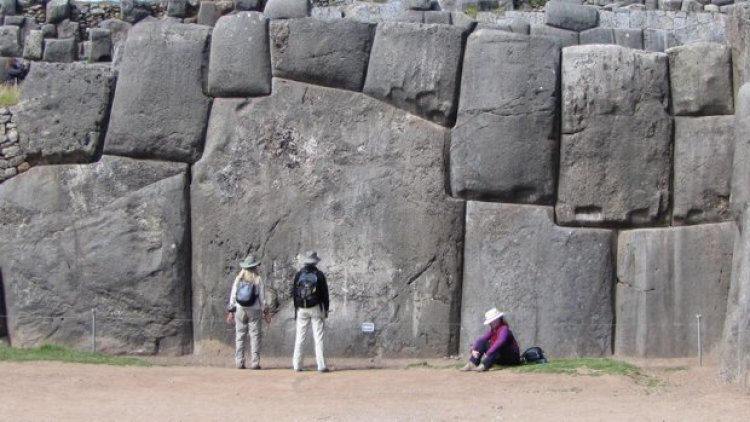