The Star of David, known in Hebrew as the Shield of David or Magen David has come to be a generally recognized symbol of Jewish identity and Judaism.  But its symbolism is much older going back to Biblical times and it is used in mystic systems such as the Kabbalah and in Sufism.

Its shape is that of a hexagram, the compound of two equilateral triangles. In effect, it shows the meeting of two cones of energy and is equivalent in symbolism to the chalice or cup and the hourglass. The difference is simply that of the degree of penetration. In some systems the symbol signifies the mystical marriage – union. 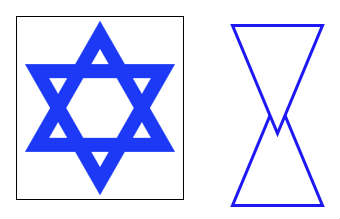