Mother and Father in different cultures

Mircea Eliade describes the Mother goddess found in many cultures as 'an inexhaustible source of cosmic fertility'.  The symbol of the Mother goddess is found in pre-Aryan civilisations along the Indus valley as well as countries in Afro-Asia including Egypt.  Often the goddesses are nude 'of the Yaksini type' [Eliade] and the images can often be found with images of ficus religiosa [the fig].

The Paleolithic period extends from 2.5 million years ago to the introduction of agriculture around 10,000 BCE. It is the prehistoric era distinguished by the development of stone tools, and covers the greatest portion of humanity's time on Earth.  The only evidence of Mother goddesses from this age which have survived relatively intact are stone carvings.  Several small, corpulent figures have been found during archaeological excavations of the Upper Paleolithic, the Venus of Willendorf , perhaps, being the most famous. This figure is estimated to have been carved 24,000–22,000 BCE. 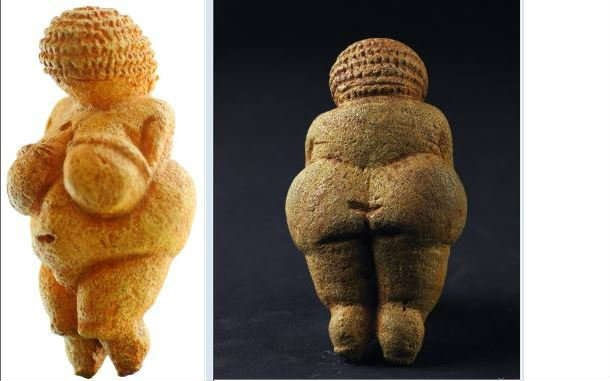 Neolithic - Various images of Mother Goddesses also have been discovered that date from the Neolithic period, the New Stone Age, which ranges from approximately 10,000 BCE.  An example of such a Mother Goddess figure can be found on the Mediterranean island of Gozo.  In Qala, Gozo, a large sculpted 4 metre high statue of the Mother Goddess [Mother] still survives. The statue has a lion’s head and under the statue there is a square hole. In the Summer Solstice this hole lights up with the rising sun. About 50m away pointing east, there is a sculpted statue of a sleeping baby face up [Child], pointing to the Mother Goddess and 50m away pointing north east, there is a phallus [Father – creator], all of them forming a triangle [three].

Mesopotamian - the Mother and Father roles are found within the Mesopotamina system where they are known as Enki and Ninhursag.

Ancient Egyptian - just like the Hindu and Greek systems the Egyptian pantheon contained a vast number of Mother and Father figures.   Mother goddesses are present in the earliest images discovered among the archaeological finds in Ancient Egypt.  The goddesses are often symbolically represented by animals seen as good mothers—the lioness, cow, hippopotamus, white vulture, cobra, scorpion, and cat.  Hathor, for example, was an ancient Mother goddess worshipped as a cow-deity from at least 2700 BCE.  Isis was also a Mother goddess, she had a brother, Osiris, who became her husband.

Greek system - In Greek mythology, the very first goddess to appear was Gaia the original Mother goddess.  In Hesiod's Theogony,  Gaia is created from Chaos.  She is depicted, just like the Venus of Willendorf  with big breasts.  She is the mother of all the gods of Olympus. She brought forth Uranus, the starry sky, her equal, to cover her, the hills, and the fruitless deep of the Sea, Pontus.  It may be worth noting that this corresponds with the Biblical story of creation.
Gaia produces these systems "without sweet union of love," out of her own self using Parthenogenesis  (from the Greek parthenos, "virgin", genesis, "creation").  In effect virgin birth.
The reason that there are so many gods and goddesses in Greek myth is because the greeks saw creation as an ongoing process.  Thus, if we take an example.
There may be the creation of a flower system – the God ‘plantus’!  From this god another god is formed – the god ‘daffodilus’ and perhaps by combining two gods – ‘daffodilus’ and ‘narcissus’ we get a hybrid ‘dafficus’ and so on.  The Greeks were thus trying to express both the order in which they perceived the universe was created and also the way sub-systems were formed from systems.

Germanic - Many religions associate the Mother Goddess with a wheel.  A good example of the use of the Mother Goddess with the wheel is in early Germanic religions. In the 1st century BC, Tacitus recorded rites amongst the Germanic tribes focused on the female goddess Nerthus, whom he calls Terra Mater, 'Mother Earth'. Prominent in these rites was the procession of the goddess in a wheeled vehicle through the countryside. Among the later Anglo-Saxons, an 'eorþan modor' (Earth Mother) and 'folde, fira modor,' (Earth, mother of men) is also found.

In Central Germany, legends regarding Frau Holle [Mother goddess] are recorded throughout the Middle Ages. She appears as a helpful goddess, in charge of spinning.She rides through the countryside during the Twelve-nights, sometimes asking local peasants for assistance repairing her wagon.  In several German legends, she is known as Frau Goden. Goden is simply another name for Odin, (Wotan, Godan, Wold) again indicating that Frau Holle [Mother]  is most likely Odin's[Father] wife.

Hindu system - Devi is the Sanskrit word for Goddess, used mostly in Hinduism. Devi is synonymous with Shakti, the female aspect of the divine. She is the female counterpart without whom the male ‘active’ aspect,  remains impotent and void.

The Mother role can be traced back to early Vedic culture, and perhaps, even before that time. The Rigveda calls the divine female power, Mahimata (R.V. 1.164.33), a term which literally means Mother Earth [symbolic Earth – not earth earth].  There are lots of synonymous names – for example, Vedic literature alludes to her as Viraj, the universal mother, as Aditi, the mother of gods, and as Ambhrini, the one born of the Primeval Ocean.

The ‘Father’ aspect in Hindu mythology has been split into  three – Brahma, Vishnu, and Shiva.  These three activities are collectively known as the Trimurti. In this school of religious thought, Brahma is the creator, Vishnu is the maintainer or preserver, and Shiva is the destroyer or transformer – this time of systems not souls.

Let me go back to the analogy.  In order to create a new system you often have to destroy an old one.  In systems development you can have big destructive events and smaller destructive events which have to be co-ordinated with the creation events which are going on at the same time.  If you think about it, this is the definition of evolution or enhancement – creation of some new part and removal of the old part it replaces.  Maintenance of a computer system is also a well known part of the process

Thus Hinduism, as a philosophy concerning the nature of the spiritual and physical realm, is extremely close to the way computer systems are developed and in my view a good match for the way evolution works.  As one of the oldest religions, it has had, after all, considerable time to be developed.

Shinto – Ian Reader
According to the Kojiki, as the universe began, a number of deities came into existence and they in turn produced two further deities Izanagi [male] and Izanami [female] who were given the task of producing the land of Japan from the primordial swamps.  Standing on the bridge of heaven, they dipped a sacred sword into the sea, stirred it and from this came forth the island of Onogoro, the original land of Japan.  The two deities then set about peopling this island with deities that would live in and give life to the land.