In many Biblical stories the concept of the cradle and the boat are combined – a cradle that is an ark that is a carrier of souls – in this case baby souls.  The story from Exodus cannot be taken literally.  It is the story of the birth of a shamanic baby – a baby with the special gifts of a shaman or mystic if you like.  A prophet ‘born of the waters’.

1And there went a man of the house of Levi, and took to wife a daughter of Levi.

2And the woman conceived, and bare a son: and when she saw him that he was a goodly child, she hid him three months.

3And when she could not longer hide him, she took for him an ark of bulrushes, and daubed it with slime and with pitch, and put the child therein; and she laid it in the flags by the river's brink.

4And his sister stood afar off, to wit what would be done to him.

5And the daughter of Pharaoh came down to wash herself at the river; and her maidens walked along by the river's side; and when she saw the ark among the flags, she sent her maid to fetch it.

6And when she had opened it, she saw the child: and, behold, the babe wept. And she had compassion on him, and said, This is one of the Hebrews' children.

7Then said his sister to Pharaoh's daughter, Shall I go and call to thee a nurse of the Hebrew women, that she may nurse the child for thee?

8And Pharaoh's daughter said to her, Go. And the maid went and called the child's mother.

9And Pharaoh's daughter said unto her, Take this child away, and nurse it for me, and I will give thee thy wages. And the women took the child, and nursed it.

10And the child grew, and she brought him unto Pharaoh's daughter, and he became her son. And she called his name Moses: and she said, Because I drew him out of the water. 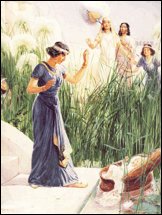 In the following picture taken from a Burmese book of Buddhist fables and legends [in Burmese hence the writing at the bottom] we see the concept of the cradle or basket also exists in the far East.  Some of the deities are flying without any visible means of transport, but one or two appear to be in cradles  - they are in the clouds and the building in the background is a palace … 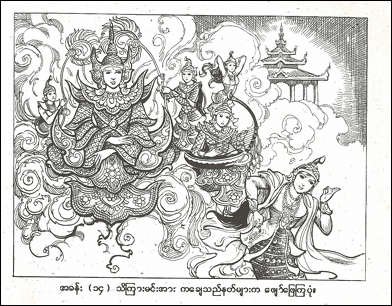 Much of the legendary and mythical association that has risen about the cradle is because of the use of rocking and swaying or swinging as a means of inducing spiritual experience.

All of the three forms – swinging, rocking and swaying induce a hypnotic trance and as such are ‘carriers of the person’ to another realm.

A shamaness recalled the first visit made to her – in dream – by a tutelary spirit ‘dressed up in smart Hindu clothes’.  She refused him, so ‘he took me up in a whirlwind and carried me away to a very high tree, where he made me sit on a fragile branch.  There he began to sing and as he sang he swung me to and fro.  I was terrified of falling from the great height and I hastily agreed to marry him’.  The reader will have recognised some typically initiatory motifs – the whirlwind, the tree, swinging.

Source Elwin, Verrier – The Hobby Horse and the Ecstatic Dance