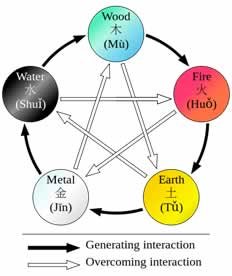 The Wu Xing, also known as the Five Phases, the Five Agents, the Five Movements, and the Five Steps/Stages, is a fivefold conceptual scheme that many traditional Chinese texts use to explain a wide array of phenomena, from cosmic cycles to the interaction between internal organs, and from the succession of political regimes to the properties of medicinal drugs.

"Wu Xing" has nothing to do with the levels and layers but the fact that the names of the symbols are the  same as some of the levels often causes huge confusion.  The Chinese xing are "primarily concerned with process and change”.

The "Five Phases" are

This order of presentation is known as the "mutual generation" sequence. In the order of "mutual conquest" or "mutual overcoming", they are Wood, Fire, Earth, Metal, and Water.

The five elements are usually used to describe the state in nature: