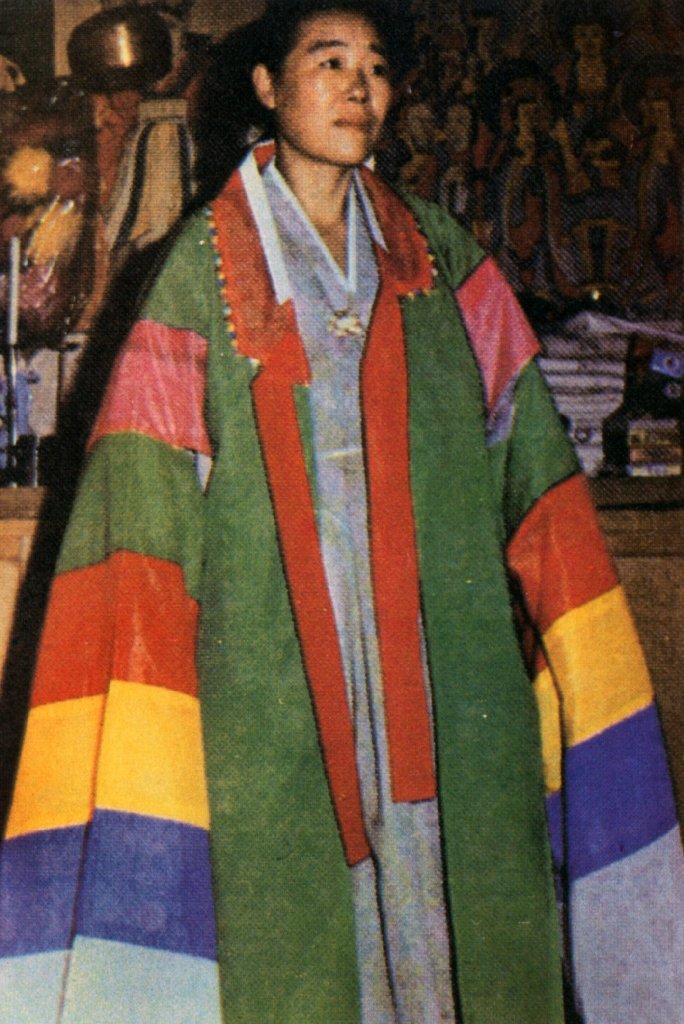 After sajesamsong (the fourth procedure), the mu

The mu sings a muga for Princess Bari while shaking bells in her left hand and beating with her right hand on an hourglass-shaped drum that is fixed at an angle of 70 degrees. 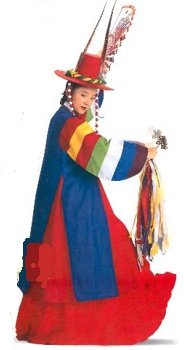 I will begin with the traditional colour symbolism in pre-modern Korean society, focusing on “ohaeng (the Five Elements)‟, which had a profound influence on Korean art and culture in general.

It is based on the ancient Chinese cosmology, and according to it, the universe consists of five elements which are believed to be linked to the “five” directions, each direction representing a colour and an animal.

The tombs dating as far back as to the Three Kingdoms Period, contain murals depicting some or all of the five animals representing the five directions in the five colours linked to them. It is also reflected in many aspects of culture during the Chosŏn period (1392 –1910).

In contemporary Korean society, colour symbolism based on ohaeng is no longer dominant, but it is still well represented in kut, the Korean shamanistic ritual, and various other traditional folk performances, such as (obang) Ch’ŏyongmu, o kwangdae masked dance dramas, etc.

In kut, it is directly shown as obanggi (the Five Directional flags), which mudang (the Korean shamans) use as a prop for fortune-telling, predicting the future according to the colour of the flag picked by the sponsors of the kut. However, although the basic concept remains the same, the colour symbolism in kut has also undergone changes, as traditions are modified and invented by mudang themselves. In mainstream Korean society, certain aspects of traditional colour symbolism remain while new traditions are invented.

In pre-modern Korean society colour symbolism was mainly based on the ancient Chinese cosmology called ohaeng, according to which there are five basic elements in the universe, namely water, fire, wood, metal and earth. They are linked to the five directions, i.e. north, south, east, west and centre.

There existed five directions in the ancient Chinese cosmology, the centre being the fifth. The centre is deemed to be the heart, controlling the other four directions. That is the reason why the ruler of the earth, the Chinese emperor is called hwangje, literally meaning the yellow emperor, and his costumes were in yellow, the colour which represents the centre. The five directions are represented by black, red, blue, white and yellow respectively, and also by five divine animals, namely black turtle, red phoenix, white tiger, blue dragon and yellow dragon.

Ohaeng was thought to be a symbolic fusion of ethics and philosophy, which controls the everyday life of human beings in society.

When exactly ohaeng was introduced to Korea is unknown, but its concept was already present in ancient arts dating back to the Three Kingdoms Period.

Some extant ancient Koguryŏ tombs which were built from the fourth to the seventh century contain paintings of the five directional animals, generally called sashindo (pictures of the four divine animals). ………………

One of the most immediately apparent characteristics of kut is the use of piercingly bright colours, dark or sombre colours being avoided as far as possible. Eliade (1951) interprets the abundant use of primary colours, also found in many other similar rituals, as man symbolically creating a rainbow, which is believed to provide the bridge between man and the spirits. In kut colours also carry special symbols, which are clearly understood and intentionally manipulated by the shamans.