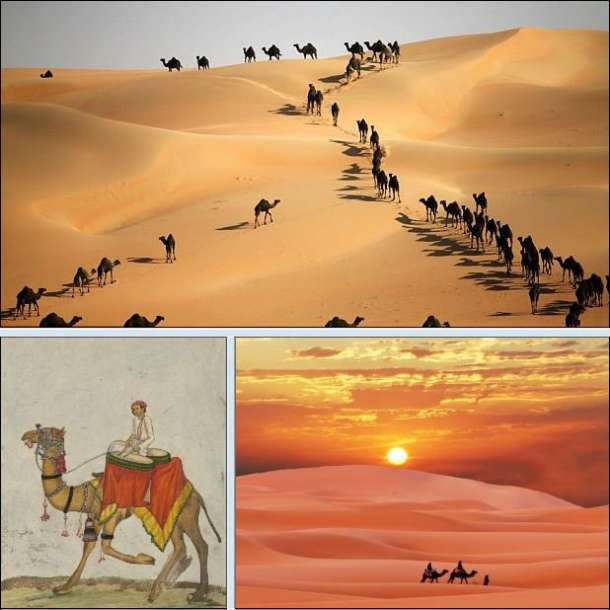 The Camel can be symbolically a Mountain [!] - in other words a god or an Intelligence.   Because its hump [the mountain] is used to store water [spiritual energy]  it takes on some of the symbolism of the Hollow mountain.  A twin humped camel simply takes on the symbolism of the Twin peaks.  This is the simplest symbolic meaning.  It is a sort of god, and to most Arabs, given its usefulness, this symbolism tends to be reinforced.

But we have some added symbolism derived from the fact that a camel can store water.   During the initiation of a candidate to the Mysteries, and in those Mystery religions that used sexual stimulation or sexual methods as the means of provoking a spiritual experience [usually a kundalini experience], the candidate was asked to temporarily abstain from all sex in order to ' store energy', build up his or her reserves of energy in order that the process of initiation could begin using a very high level of initial energy.

The energy would spout up like a fountain from the base of the spine, pass the twin pillars [in the neck and used in Qigong neck stimulation] and then shoot out like the tassle on a party hat and leave you open permanently to all spiritual input.

The back of the neck, being a narrow gate to the head, was often referred to as the needle, from which we get the quote uttered by Jesus

“Mark 10:25 - It is easier for a camel to go through the eye of a needle, than for a rich man to enter into the kingdom of God”

Or to put it another way reaching your Higher spirit and enlightenment is easier for a camel [a person absolutely full of stored up spiritual energy] than a rich man, one who has amassed material wealth or symbolically, just treasure.