Osteopathy is both a philosophy and system of first proposed by Andrew Taylor Still MD in 1874. Its practitioners are known as osteopaths.

The system is based on recognition that the body is not just a mechanical and thus physical system, but is also a functional system and that form and function are closely integrated.  There is also far more emphasis on the concept of healing as opposed to treatment – there is for example recognition that  the body has the ability to heal itself; that many illnesses are functionally based and only manifest later as form based illness and that it is the role of the osteopathic practitioner to facilitate the process of healing.  The principles of osteopathy are

We will first take a look at osteopathy and then home in on the techniques of osteopathy in subsequent sections on this website– especially Craniosacral osteopathy.  In this I will be concentrating on the healing techniques used, because exactly the same principles and techniques used for healing are used to invoke a spiritual experience

A summary of the techniques and how they relate is shown below – I have only included those that are related to spiritual experience, there are far more related to healing in general.

The principles of osteopathy

Osteopaths use palpation to ‘feel’ what may be wrong in someone’s body.  The quality of tissue texture is classified as a ‘palpatory finding’ and changes are searched for mostly around the paravertebral muscles. Muscle is assessed at both the superficial (skin) layer and at deeper (muscle) layers. The texture is dependent on the state the tissue is in; acute or chronic loads result in different texture changes. Three pointers are used in assessment:

Both in acute as well as chronic tissue changes, there is sympathetic hyperactivity.

Initially this hyperactivity creates vasoconstriction and sweat secretion, but in acute somatic dysfunction, where inflammation is present, there can be vasodilation and the tissue will feel warm. So warmth is an indicator of the severity of the dysfunction.  With experience and practice an osteopath can feel the tissue changes and not only determine whether there is a somatic dysfunction, but also whether it is acute or chronic.

Asymmetry is mainly found by inspection of the body. Although simple observation and visual inspection is used to detect asymmetry, palpation is again used to determine the types of asymmetric changes that have taken place.  Three ways are used to inspect the asymmetry:

Both the quality as well as the quantity of movement a person is able to perform is inspected and evaluated.

A somatic dysfunction can reveal itself in three different ways: first by the position of the vertebrae itself (evaluated by manual palpation); second by the directions of free movement a person is capable of, and third by the directions in which their movement is restricted.

If the patient pulls back or shows discomfort when palpatory pressure is applied to a part of their body, that is an indicator of sensitivity. The test is intended to be objective, however, the response of the patient is, in a way, subjective, because it depends on the individual’s sensitivity and their threshold for pain.

Tenderness differs from pain. Pain is a totally subjective cortical perception of nociceptive input reported by the patient in the absence of palpatory stimulus.

You can see that the skill of the osteopath is key in all four types of diagnostic testing.  The osteopath needs considerable practice to both help heal and to diagnose a dysfunction of tissues and articulations in the first place.

Physiological explanation of a somatic dysfunction

“ Only the nervous system can react in such a short time, which is typical for the origin of a somatic dysfunction and its release through manipulation”

He stated that somatic dysfunctions always occur in the same segment of the body that is innervated by a musculoskeletal restriction.  He also suggested that the mobility restrictions are caused by the chronic shortening of muscles. These in turn, cause over stimulation of motor neurons. Although not all Korr’s theory has stood the test of time, it is the nervous system that is thought to play the most fundamental role in somatic dysfunction.

Whenever any form of external stimulation takes place, the message is delivered to the brain by spinal neurons.  The brain, as part of the autonomic response, then sends signals back to the body and the signals are strongest  in those organs and muscles that are innervated by the same spinal segment as the original stimulation.  Two responses are key:

The ‘Van Buskirk (1990) Model’ [see over the page]  is often used to explain how the nociceptor plays a crucial role in the existence and/or maintenance of a somatic dysfunction.  Although this model is hypothetical, the explanation of the anatomical and physiological relationships between the musculoskeletal (parietal), visceral and autonomic system is important from an osteopathic point of view. 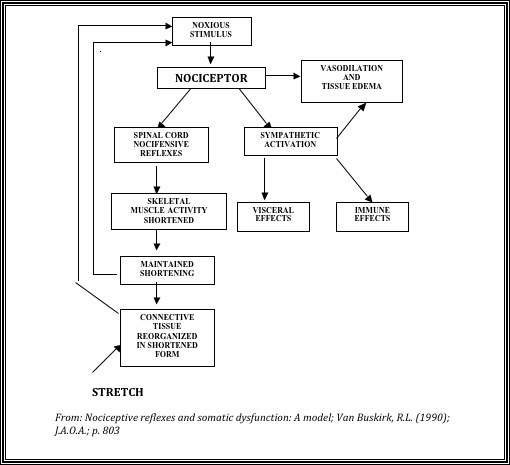 The osteopath first heals those parts of the body that are causing pain and disease.  This then means you are free of nervous sensations and can relax for the next stage.

The particular very gentle manipulation is then used to home in on very specific trigger points which are capable of giving you an experience.

The mechanism is however, LOW INTENSITY and this is key.

High intensity stimulation can cause damage, whereas low intensity can heal and also provide profound experiences.