In June 2008, astronomers unveiled what they are calling the best map ever produced of the Milky Way galaxy. The map they have produced is shown below and shows the spiral galaxy as it would look face-on to a very distant observer. 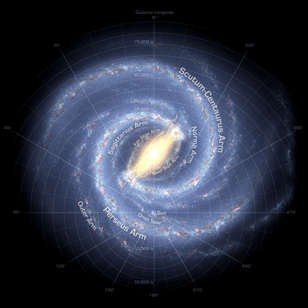 The map shows that we live in a ‘barred spiral galaxy’ where the major arms have a high density of stars, produce lots of new stars, and are clearly connected to the long bar of stars at the galactic centre.

In contrast, the minor arms of our galaxy have high gas density and probably  less star formation. The new images show that the spirals are actually made of two major arms and two minor ones. An unusual spiral arm called the Far 3-kiloparsec hugs the galaxy's central bar. The short arm appears to be a mirror image of the Near 3-kiloparsec arm on the opposite side of the galactic centre.

Mapping the Milky Way has been an unusual challenge for astronomers, one that National Geographic say is ‘like a fish attempting to map the Pacific Ocean’. The problem is compounded by the fact that dust and gases tend to obscure much of our view of the galaxy's structure.

The new map is based primarily on data collected from infrared cameras on the Spitzer Space Telescope in Pasadena, California. Using these wavelengths of light, you can see through the dust and begin to actually glimpse the true structure of our galaxy.  The sharp resolution of these cameras also allows astronomers to see how massive stars evolve and how cosmic structures take shape.

The map also includes data on the density and location of the arms from the Very Long Baseline Array, a network of ten radio telescopes. Thus for the first time, astronomers are beginning to trace out the spiral structure of the Milky Way with actual distances.

Within our Milky Way, there is not just one huge black hole but hundreds of smaller ‘rogue black holes’.  A rogue black hole is one that is speculated to have arisen from a violent merger.  For example, using a computer model, scientists at Tennessee's Vanderbilt University found that two combining black holes rotating at different speeds or of different sizes give the newly merged black hole a big kick. This sends the object hurtling in an arbitrary direction at velocities as high as 2,485 miles (4,000 kilometers) per second.

Astronomers have also found hints that dark matter may play an important role in the hot disks that form around companion-consuming black holes. A pair of artist's conceptions [above] shows the disk of material around the binary star system WZ Sge, which consists of a white dwarf pulling material from a cooler companion. According to a previous model (left), the disk contained only visible material. But new findings suggest the presence of an asymmetric outer disk of dark matter (right).