The forehead  is the so called ‘third eye point’.  It is found on the Governor vessel [energy vessels or reservoirs].  The Thrusting vessel and Governor vessel meet at the third eye. In effect this is a point of convergence of Yin and Yang energy.  This point and the perineum thus provide a linking circuit. 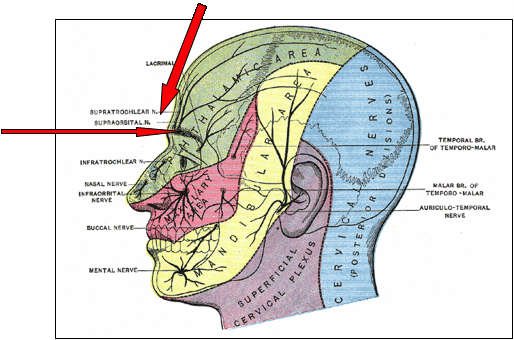 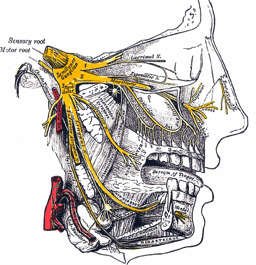 The ophthalmic nerve (V1) carries sensory information to the trigeminal nerve from the scalp and forehead, the upper eyelid, the conjunctiva and cornea of the eye, the nose (including the tip of the nose, except alae nasi), the nasal mucosa, the frontal sinuses, and parts of the meninges (the dura and blood vessels), thus all these can be used as trigger points.

It then meets up and follows the course of the trigeminal nerve which you can see in the diagram to the left. This nerve links up a number of trigger points on the face – the nose, chin and so on as well as that from the forehead. 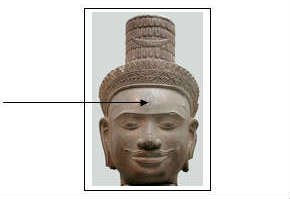 As a purely interesting aside, one of the odd customs of the British [and we know we are odd at the best of times] was to place a penny or some other coin on the third eye of a deceased person.  The reason for such an action appears to be a belief that is widespread in the world, I will quote

Tibetan Book of the dead
since the consciousness of the deceased has a tendency to leave the body from whichever point it is touched, the relatives, loved ones and the attending lama should refrain from touching the body or only tap the crown fontanelle in order to induce the consciousness to leave from that point.

Clearly, we believe it is better if it leaves via the third eye and I suspect this belief is probably Celtic in origins.