Chloroform is an organic compound with formula CHCl3. It is a colourless, sweet-smelling, dense liquid and is considered somewhat hazardous.

Chloroform has a multitude of natural sources – many marine in origin -  brown, red and green seaweeds; the macroalga Eucheuma denticulatum; [which is cultivated and harvested on a large scale for carrageenan production];  Hypnea spinella; Falkenbergia hillebrandii; and Gracilara cornea along with seven indigenous macroalgae; brown and green algae;  diatoms and others. It is also manufactured in considerable amounts. It is used for:

It has now been fairly well established that chloroform has a toxic action on the heart, liver and kidneys ‘although the exact nature and extent of these complications is still debated’ [Meyer]

There also seems to be some evidence that it isn’t terribly effective as an inducer of spiritual experience.  I have included a number of examples the majority of which seem to indicate that very little happens except nausea, vomiting and headaches and if anything does it is more probably caused by hypoxia.  Breathing about 900 ppm for a short time causes dizziness, fatigue, and headache and that is it.

It is also all too easy to give yourself a fatal dose of chloroform, with death due to respiratory or cardiac arrest. As might be expected for an anaesthetic, chloroform vapors depress the central nervous system. It is immediately dangerous to life and health at approximately 500 ppm, according to the U.S. National Institute for Occupational Safety and Health.

A great number of papers are available describing the damage done to the liver by chloroform exposure, for example:

and to the kidneys, for example:

The accomplishments of John Snow (1813-1858), physician-epidemiologist, inventor and anaesthetist to Queen Victoria, are well documented, but the causes of his untimely death at age 45 remain conjectural.

Snow suffered a paralysing stroke while working on his magnum opus, On Chloroform and Other Anaesthetics, and died a few days later on 16 June 1858.

Snow had a history of renal problems associated with tuberculosis. He also experimented on himself with ether, chloroform and other agents over several years, but whether this prolonged self-experimentation contributed to his early death is uncertain. A photograph of Snow taken in 1857 shows that the fingers of his right hand were swollen. Could this be a clue to the cause of his death?

The "modern" view is that Snow's early tuberculosis and associated renal disease led to hypertension, chronic renal failure and stroke. The tuberculosis and renal involvement may have been worsened by vegetarianism and perhaps resulting vitamin D deficiency. However, the renal damage caused by tuberculosis is unlikely to have been progressive.

Based on current evidence of renal toxicity associated with exposure to anaesthetic agents, it is perhaps more likely that extensive and prolonged self-experimentation with anaesthetics over a 9-year period led to Snow's renal failure, swollen fingers and early death from stroke.

Chloroform is a potent central nervous system and respiratory depressant. The toxicities associated with chloroform frequently occur after inhalation. Hepatotoxicity is secondary to production of a toxic metabolite, with a peak elevation of liver enzymes 72 hours after exposure. Acute liver failure after chloroform inhalation is rarely described, this syndrome being produced mainly by viral hepatitis, idiosyncratic drug-induced liver injury, and acetaminophen ingestion. This report describes the case of a 46-year-old woman who presented to emergency department with coma, signs of respiratory failure, and solvent odor of her breath after chloroform inhalation and binge drinking. In evolution appeared lethal acute liver failure and rhabdomyolysis, despite maximum supportive care. Necroptic examination revealed microvesicular steatosis and tubular renal necrosis, specific for chloroform toxicity. This case illustrates the dramatic impact on liver of two well-recognized hepatotoxins. Mechanisms of chloroform and alcohol-induced liver toxicity are reviewed.

and some people develop sores and myeloma [cancer of plasma cells] when exposed to chloroform.

The relationship between multiple myeloma and occupational exposure to six chlorinated solvents.

METHODS:
In-person interviews obtained occupational histories and information on jobs with likely solvent exposure. We assigned exposure metrics of probability, frequency, intensity and confidence using job-exposure matrices modified by job-specific questionnaire information. We used logistic regression to estimate ORs and 95% CIs for associations between multiple myeloma and ever exposure to each, and any, chlorinated solvent and analysed whether associations varied by duration and cumulative exposure. We also considered all occupations that were given the lowest confidence scores as unexposed and repeated all analyses.

CONCLUSIONS:
Evidence from this relatively large case-control study suggests that exposures to certain chlorinated solvents may be associated with increased incidence of multiple myeloma; however, the study is limited by relatively low participation (52%) among controls.

The US National Toxicology Program's eleventh report on carcinogens implicates it as reasonably anticipated to be a human carcinogen, a designation equivalent to International Agency for Research on Cancer class 2A. The IARC itself classifies chloroform as possibly carcinogenic to humans, a Group 2B designation. It has been most readily associated with hepatocellular carcinoma.   Caution is mandated during its handling in order to minimize unnecessary exposure. ["International Agency for Research on Cancer (IARC) - Summaries & Evaluations: Chloroform". Retrieved 2010-09-02.] 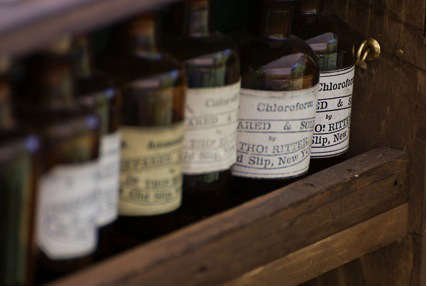