Brain and its functions

The brain is hardware, but each of the organs is designed to process a function. This section explains what we know so far about the functions of the various parts of the brain.

The cerebral cortex is the part of the brain that appears to be designed to process the functions that make human beings unique as a species. Distinctly human traits including language and originate in the cerebral cortex.

The cerebral cortex can be divided into four sections, which are known as lobes (see image below). The frontal lobe, parietal lobe, occipital lobe and temporal lobe have been associated with different functions ranging from reasoning to auditory processing.

At the back of the frontal lobe, near the central sulcus, lies the motor cortex. This area of the brain receives information from various lobes of the brain and utilizes this information to carry out body movements. 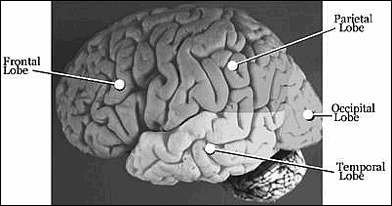 The temporal lobe is located on the bottom section of the brain. It can first be divided into the left and the right temporal lobe.

The Inferior temporal lobe is involved in the laying down of perceptions or even some perception processing.

is comprised the hindbrain and midbrain.

The hindbrain contains the medulla, the pons and the reticular formation. The hindbrain is the structure that connects the spinal cord to the brain. It appears to be the seat of the processing of the input from the Autonomic systems. There is also the possibility that it contains some of the functions of the 5 senses [taste and smell].

The midbrain is the smallest region of the brain that acts as a sort of relay station for auditory and visual information. It controls many important functions such as the visual and auditory systems as well as eye movement. Portions of the midbrain called the red nucleus and the substantia nigra are involved in the control of body movement. This maybe where other Nervous system processing takes place. 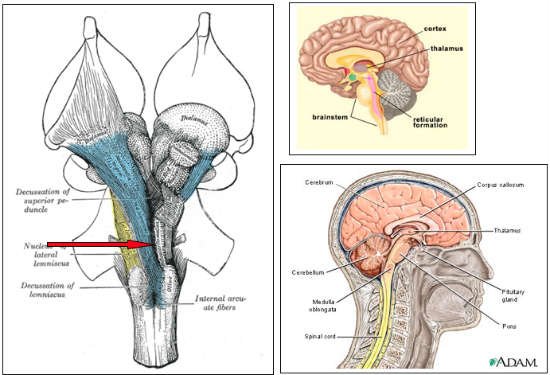 lies on top of the pons, behind the brain stem. The cerebellum is comprised of small lobes and receives information from the balance system of the inner ear, sensory nerves, and the auditory and visual systems. It is involved in the coordination of motor movements as well as basic facets of memory and learning. In effect, whilst advanced learning takes place in the Cerebral cortex, simple learning using perceptions from our nervous system and 5 senses takes place here.

is comprised of four main structures:

These structures form connections between the limbic system and the hypothalamus, thalamus and cerebral cortex. 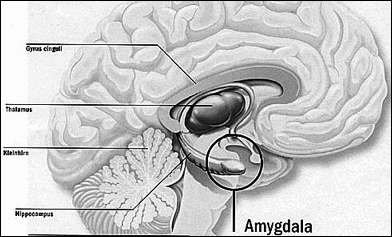 The hippocampus - is the area of the brain involved in consolidating information from short-term memory into long-term memory. The hippocampus is thus ‘important in memory and learning’, but it appears to be more closely related to perception.

Amygdala – The amygdala is the seat of emotion and emotions.

We have two amygdalae – a right one and a left one. The left one appears to be the seat of negative emotions, the right the seat of positive emotion.

The mapping of form to function is shown overleaf. As you can see there is no mapping of the composer. This is because the Higher spirit is at a higher vibrational level than the body and needs no organ to operate. It is immortal. The personality? Well most seem to think it resides in the heart. 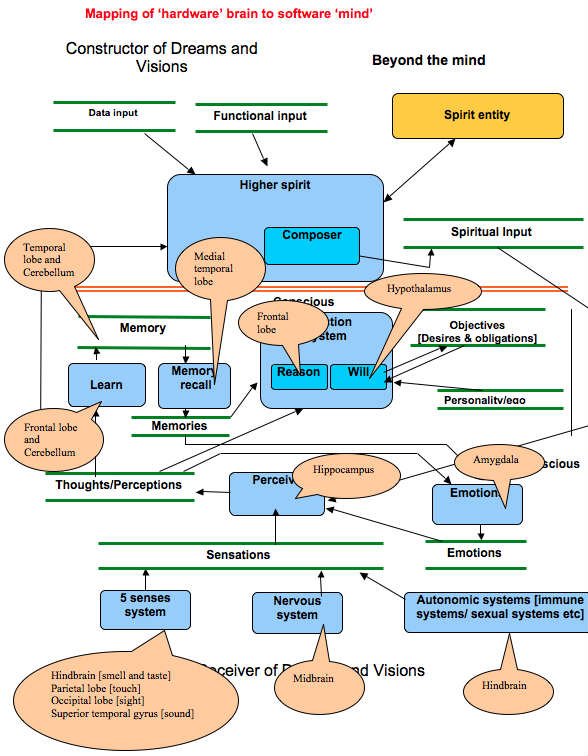