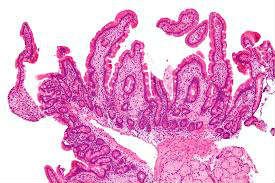 Whipple's disease is a systemic infectious disease caused by bacteria, first described by George Hoyt Whipple in 1907.  The disease is regarded as extremely rare, with an incidence (new number of cases per year) of one case per million people.  I have not gone into great detail here because of its rarity.

The patients are predominantly male (86% in a survey of American patients), although in some countries the rate of women receiving a diagnosis of Whipple's disease has increased in recent years. It occurs predominantly in those of Caucasian ethnicity. 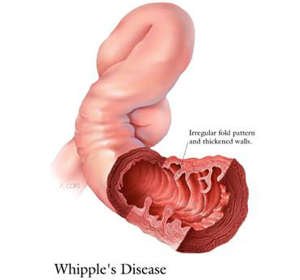 Whipple's disease primarily causes malabsorption but may affect any part of the body including the heart, lungs, brain, joints, skin, and the eyes. Weight loss, diarrhea, joint pain, and arthritis are common presenting symptoms, but the presentation can be highly variable and approximately 15% of patients do not have these classic signs and symptoms.

Whipple's disease is caused by the bacterium Tropheryma whipplei.  The disease is common in farmers and those exposed to soil and animals, suggesting that the infection is acquired from these sources.  T. whipplei appears to be an environmental organism that is commonly present in the gasterointestinal tract but remains asymptomatic until triggered by some, as yet, unknown cause.

When recognized and treated, Whipple's disease can usually be cured with long-term antibiotic therapy; untreated the disease is ultimately fatal.

And in very rare cases it can cause hallucination and visions.

Brain damage – the disease can cause  lesions to the brain.