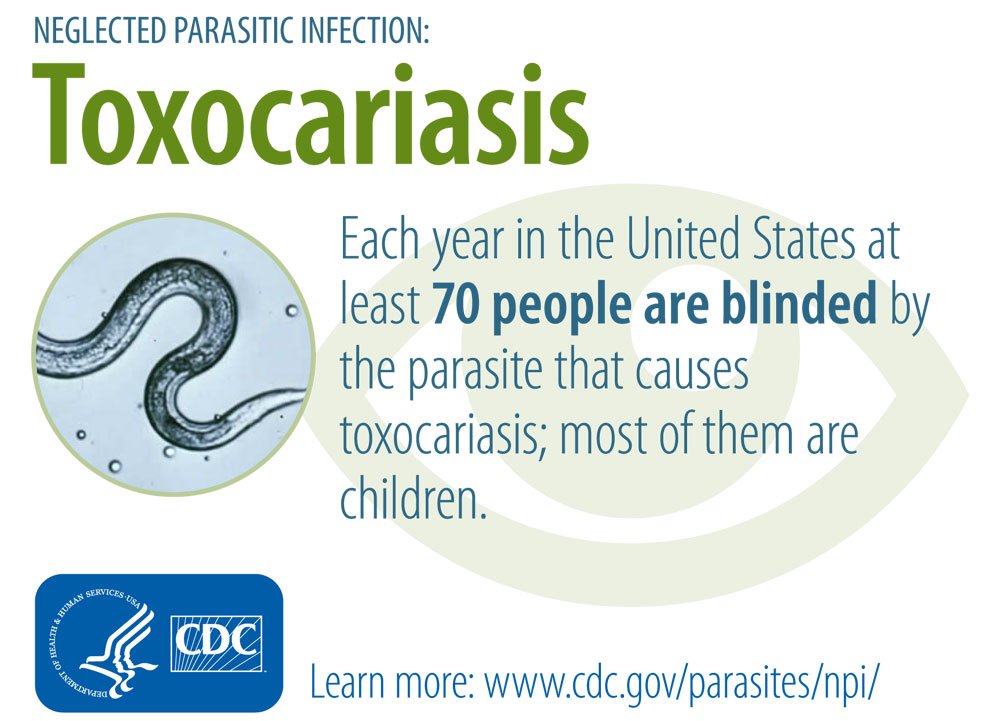 Toxocariasis is seen throughout the world. Most cases of toxocariasis are seen in people under the age of twenty. Seroprevalence is higher in developing countries, but can be considerable in first world countries, as well.  In Bali, St. Lucia, Nepal and other countries, seroprevalence is over fifty percent.  U.S. seroprevalence is 14% for the population at large. Approximately 10,000 clinical cases are seen a year in the U.S., with ten percent being OLM.   Permanent vision loss occurs in 700 of these cases. 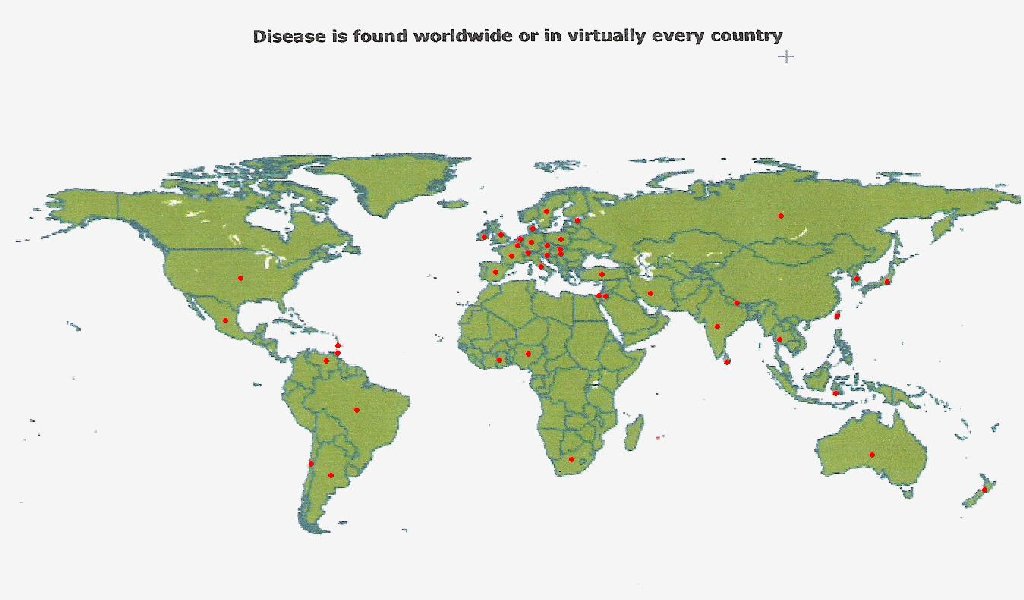 This map shows the distribution of Toxocariasis. Red dot indicates that Toxocara has been reported in that country. Map courtesy of the GIDEON database

Toxocariasis is a major cause of blindness and may provoke rheumatic, neurologic, or asthmatic symptoms.  There is a significant correlation between high Toxocara antibody titers and epilepsy in children.  The severity of the diseases produced depend on the parasitic load, however, parasitic loads as high as 300 larvae in a single gram of liver have been noted in humans.  When symptoms do occur, they are the result of migration of second stage Toxocara larvae through the body.  Other  visible symptoms may include changes in behaviour, inability to sleep,  wheezing, and lymphadenitis.  Larvae migration incites inflammation of internal organs and sometimes the central nervous system.

Ocular larva migrans (OLM) often occurs in just one eye and from a single larva migrating into and encysting within the orbit.  Loss of vision occurs over days or weeks.   Other signs and symptoms are red eye, white pupil, fixed pupil, retinal fibrosis, retinal detachment, inflammation of the eye tissues, retinal granulomas, and strabismus.  Toxocara damage in the eye is permanent and can result in blindness. 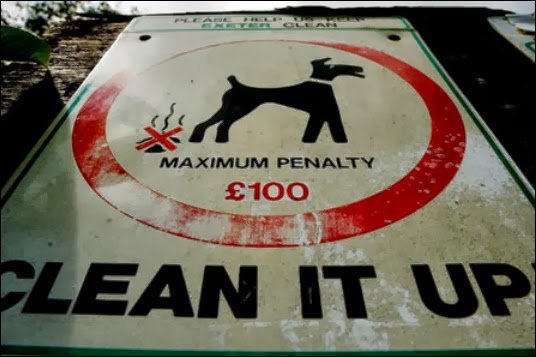 The best form of treatment is prevention - know the enemy!

Transmission of Toxocara to humans is usually through ingestion of infective eggs.

These eggs are passed in cat or dog faeces, but the defecation habits of cats [faeces are rarely picked up or collected by cat owners] cause T. cati transmission to be more common than that of T. canis.  The increasing urbanisation of foxes, however, may also have the same result.

Humans normally become infected by ingestion of embryonated eggs (each containing a fully developed larva, L2) from contaminated sources (soil, fresh or unwashed vegetables, or improperly cooked paratenic hosts).  Young children are at the greatest risk of infection because they play outside and tend to place contaminated objects and dirt in their mouths.

Even if you don’t own a cat or dog, if a cat or fox enters your garden and defecates – as these animals do as they tend not to defecate on their own territory, you and your children are at risk.

Flies that feed on faeces can spread Toxocara eggs to surfaces or foods. Eating undercooked rabbit, chicken, or sheep can lead to infection; encysted larvae in the meat can become reactivated and migrate through a human host.

will all help to reduce the chances of infection.