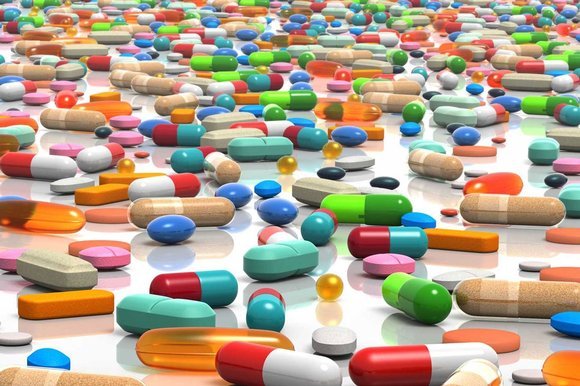 Statins are a class of drugs used to lower cholesterol levels by inhibiting the enzyme HMG-CoA reductase, which plays a central role in the production of cholesterol in the liver.

Cholesterol is an essential structural component of animal cell membranes.  It is required to establish proper membrane permeability and fluidity. In addition to its importance within cells, cholesterol also serves as a precursor for the biosynthesis of steroid hormones, bile acids, and vitamin D.  In effect, if we are in need of repair for any reason, then we should expect the cholesterol levels to be high.

To re-emphasise this point all our sex hormones - androgen, estrogen and testosterone are manufactured using cholesterol, so one of the side-effects of lowering cholesterol is infertility and impotence.

High cholesterol is an indicator of other problems - a symptom and not a cause.

Increased cholesterol levels have been associated with cardiovascular diseases (CVD), and statins are therefore used for these diseases.  But this is of course hugely simplistic thinking - even naive.  The causes of heart disease and blood circulatory system disease are:

Cholesterol is often present in high amounts if the damage done by these is high.  If we remove the cholesterol, we remove an essential structural repair substance.

the pharmacological target of statins, the 3-hydroxy-3-methyl-3-glutaryl coenzyme A (HMG-CoA) reductase, is one of the upstream enzyme of the mevalonate pathway, its inhibition may determine a substantial impoverishment of additional lipid moieties required for a proper cellular function. …. PMID:  24548821

The thinking behind giving statins as a mechanism of helping those with heart disease is thus flawed.  We should be treating the cause not the symptoms. [see Healing yourself]

Efficacy means they don't work.  One of the side effects of statins is memory loss so this presumably covers the 6% shown above!  Overall 80% according to this survey stopped because the statins didn't work or hurt them

It may be of interest to know that as of 2014, the number of people in the USA reported to have had side effects through official channels [in effect excluding all those who were not recorded officially] was well over 250,000.

One interesting side-effect that is not frequently mentionned is death.  When we first created this page, we provided a page in the science section so that you can see the figures - see Statin deaths:

These figures come from eHealthme and were correct as at August 2015.  They only apply to the US where the figures were collected and not the rest of the world.  The figure then was  7,804.

Given the difficulty of correlating deaths with cause, this figure is somewhat remarkable.  It means that doctors somewhere have made the connection.

In order to provide a different perspective on these figures we have also provided the deaths and adverse reports as at January 2016.

Using the Adverse Drug Reports submitted to the FDA and SEDA in the USA by doctors only [thus excluding all those people who have not reported effects to their doctor or died without being autopsied], and including only the USA - the figures thus exclude the rest of the world.

The number of people experiencing side effects from statins

The number of deaths from statins

May they rest in peace

from eHealthme case reports - Madashell (2 years ago):  I am a 50yr old that was put on Simvastatin in 2010. Before my heart attack I had never experienced any high cholesterol or high blood pressure. Since then I supposedly have both and feel like a guinea pig here. I have dealt with blurred vision, restless leg syndrome, severe headaches, extreme pain in my muscles and joints, trouble sleeping and actually feel like 100 instead of 50. My Dr. has finally taken me off it cold turkey which I had thought was not possible. Go figure. 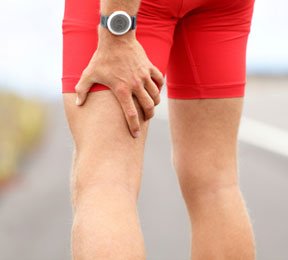 with no cholesterol to effect any repairs, cells gradually start to die and not be replaced.  Statins can thus have severe adverse effects, particularly muscle damage.

Given that the heart is a muscle, this has led to considerable concern over their effects on people with heart problems. Statins may in the end cause heart problems in those who did not previously have anything wrong with their heart.

The most common noticeable and immediate adverse side effects are raised liver enzymes and muscle problems, including muscle cramps, pain and in some cases  rhabdomyolysis (muscle breakdown).   They have been shown to cause arrhythmia. 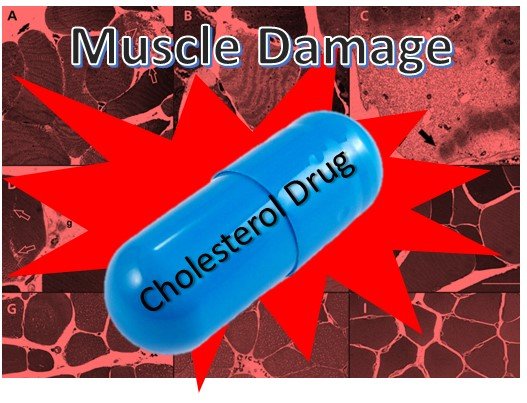 the last sentence is a especially chilling.

Statins cause both zinc deficiency and vitamin deficiency which means they affect the immune system.  The immune sysytem is our only major system of protection from invaders, as such, we leave ourselves open to numerous diseases and illnesses, for example:

Statins cause impotence in men and sexual dysfunction in women.  The interference with vitamin levels, mineral levels as well as the direct effects on hormones all serve to cause this effect.

…..Randomized controlled trials and meta-analyses suggest an increase in the risk of diabetes with statins, …... Other non-cardiovascular effects … are contrast induced nephropathy, cognition, cataracts, erectile dysfunction, and venous thromboembolism. PMID:  25035309

also note the risk of diabetes and stroke.

ranging from memory loss to Dementia and Alzheimers.  The two papers below provide specific evidence  for this effect

Statin-associated memory loss: analysis of 60 case reports and review of the literature - Wagstaff LR, Mitton MW  Arvik BM, Doraiswamy PM. - Drug Information Service, Duke University Medical Center, Durham, North Carolina 27710, USA
OBJECTIVE:  To review case reports of statin-associated memory loss as well as the available published evidence for and against such a link.
METHODS:  We searched the MedWatch drug surveillance system of the Food and Drug Administration (FDA) from November 1997-February 2002 for reports of statin-associated memory loss. We also reviewed the published literature (using MEDLINE) and prescribing information for these drugs.
RESULTS:  Of the 60 patients identified who had memory loss associated with statins, 36 received simvastatin, 23 atorvastatin, and 1 pravastatin. About 50% of the patients noted cognitive adverse effects within 2 months of therapy. Fourteen (56%) of 25 patients noted improvement when the statin was discontinued. ....
PMID: 12885101 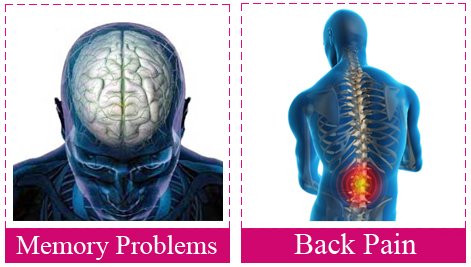 for all the reasons mentioned above connected with mineral and vitamin deficiency as well as the suppression of cell repair and immune system functions, statins are implicated in AMD and sight impairment

Role of statins in the development and progression of age-related macular degeneration.
To determine if statins are associated with the development or progression of age-related macular degeneration (AMD)………………  >1 year of statin use was associated with an increased hazard for exudative AMD.  PMID:  23314233

there appears to be a clear link between statins and both depression and suicide.  This may be connected with the brain damage they do as described above, depending on which part of the brain is damaged, for example the amygdala, then depression would be the outcome.

Several studies have …. found a significant relationship between a decrease of total cholesterol and high scores of depression, Studies among patients suffering from major depression signalled more constantly an association between low cholesterol and major depression. … some trials showed that clinical recovery may be associated with a significant increase of total cholesterol.
The hypothesis that a low cholesterol level may represent a suicidal risk factor was discovered accidentally following a series of epidemiological studies which revealed an increase of the suicidal risk among subjects with a low cholesterol level……
… These findings have challenged the vast public health programs aimed at promoting the decrease of cholesterol, and even suggest that a suspension of the administration of lipid lowering drugs is warranted. …., PMID: 12640327

And statins can also cause hallucinations both auditory and visual. 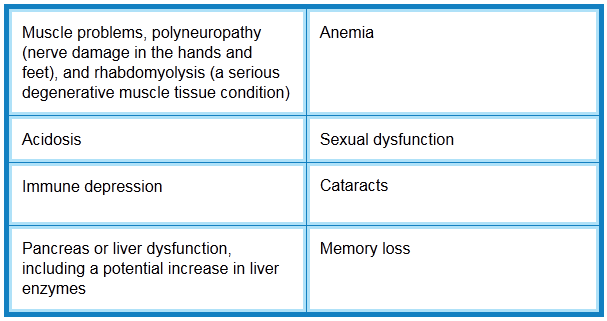 How do statins cause spiritual experiences?

The principle cause if we look at all the side effects shown above is probably Brain damage.

If you turn to the section on the drugs themselves atorvastatin and simvastatin appear to the the drugs with the highest incidence of hallucinations.  In the many study reports on PubMed, the same two drugs were associated with cognitive problems.

Another cause, might be because at too high a dose they are toxic.  Toxicity in any chemical produces the effects of delirium and delirium can give you hallucinations.

If we take a drug like Simvastatin, for example,  patients are usually started at 20 mg, but the dispersion index can go from 5 mg to 80 mg a day. If adjustments are required, the adjustment must be performed at intervals no less than 4 weeks. If too high a dose is given early on, or the rate increased at too high a frequency [less than 4 weeks] or the dose is over the maximum recommended [The highest approved dose of simvastatin is 80 mg] then hallucinations might result from the toxic affects.

Interactions with foods and herbals

There are also some odd interactions with foods that people may not be aware of and may not have been warned against.  Consumption of grapefruit or grapefruit juice inhibits the metabolism of statins. Bitter oranges may have a similar effect. Furanocoumarins in grapefruit juice (i.e. bergamottin and dihydroxybergamottin) inhibit the cytochrome P450 enzyme CYP3A4, which is involved in the metabolism of most statins (however it is a major inhibitor of only lovastatin, simvastatin and to a lesser degree atorvastatin) and some other medications. This increases the levels of the statin, increasing the risk of dose-related adverse effects. In those countries where people have to pay for their medicines, some people even take grapefruit juice to enhance the effect of lower (hence cheaper) doses of statins; this too increases the risk and the potential for statin toxicity.  In effect  grapefruit increases the dose to one that is toxic and the hallucinations may result from the toxic  effects.

Interactions with other drugs

So there is a lot to go wrong and I suspect that where hallucinations have been experienced it is the toxic effects of interactions and dose problems that is the cause.

eHealthme - ejd patient report - developed parkinson's after 4 yrs on Lipitor; discovered have genetic mutation in a gene (SLCO1B1) which encodes a transport protein responsible for moving statins into the liver to be detoxified. individuals with this mutation have been found to have plasma statin levels GREATER than 150% of normal; and a measurement of kinetics of drugs, an AUC of 200 to 400 % higher. TOXIC levels.

All the rest of the description has been balanced reporting of my findings by using research papers and recognised medical sites, but here I will put in a little emotional input, just to make you sit up and take notice!  This isn't my picture, but the website I found this on was a great deal more frightening than I have been. 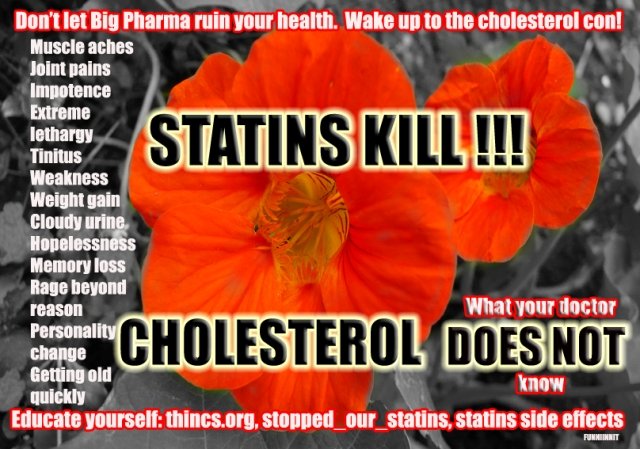 The number of hallucinations  - involuntary spiritual experiences – caused by these drugs is shown in brackets following the name, the figures were derived from SEDA figures on the eHealthme web site.  I have provided a link through to the ehealthme site for the drugs shown so that you can see all the side effects they ahve had reported via official doctor reports

There are over1,000 hallucinations in the USA alone

The following have no figures