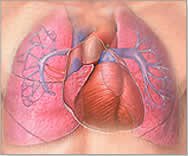 Pulmonary hypertension (PH) is an increase in blood pressure in the pulmonary artery, pulmonary vein, or pulmonary capillaries, together known as the lung vasculature.

Pulmonary arterial  hypertension results in the vasoconstriction or tightening of blood vessels connected to and within the lungs. This makes it harder for the heart to pump blood through the lungs, much as it is harder to make water flow through a narrow pipe as opposed to a wide one. Over time, the affected blood vessels become both stiffer and thicker, in a process known as fibrosis. This further increases the blood pressure within the lungs and impairs their blood flow. In addition, the increased workload of the heart causes hypertrophy of the right ventricle, making the heart less able to pump blood through the lungs, ultimately causing right heart failure (a condition known as cor pulmonale). As the blood flowing through the lungs decreases, the left side of the heart receives less blood. This blood may also carry less oxygen than normal. Therefore it becomes harder and harder for the left side of the heart to pump to supply sufficient oxygen to the rest of the body, especially during physical activity. 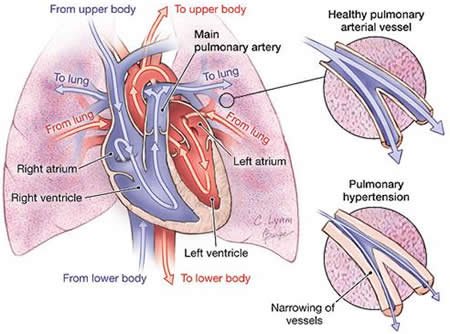 Because symptoms may develop very gradually, patients may delay seeing a physician for years. Common symptoms are shortness of breath, fatigue, dizziness, a non-productive cough, angina pectoris, fainting or syncope, peripheral edema (swelling around the ankles and feet), and rarely hemoptysis (coughing up blood).  Pulmonary venous hypertension typically presents with shortness of breath while lying flat or sleeping, while pulmonary arterial hypertension (PAH) typically does not.

Pulmonary hypertension can be caused by both physical causes and emotional causes.

The main causes are as follows, all these are explored in the section  Blood circulatory system disease, itself:

In addition to the causes listed under the more generic  following are additional causes:

There is good evidence that extreme emotion can also cause pulmonary hypertension - rage, fear, grief and so on.

— Descuret records the case of a woman, set. 64, subject to violent fits of passion, in one of which "her little eyes sparkled, her face was injected, her large jugulars were distended, and a violent fit of coughing brought up in my presence bloody expectoration of a bright colour."

Dr. Sweetser cites from Broussais "the case of a lady, who on feeling a living frog fall into her bosom from the claws of a bird of prey while she was sitting on the grass, was instantly seized with such a profuse bleeding from the lungs that she survived but a few minutes" (Mental Hygiene. By Dr. Sweetser. 1844, p. 28).

where positive emotion is involved it is usually a form of relief preceeded by negative emotion, in other words, the actual buildup is still caused by negative emotion, but the violent change occasioned by relief is the straw that finally 'breaks the camel's back'.  The following example relates to a stroke - thus not pulmonary hypertension, but a stroke is still a rupture of a blood vessel as such the example is pertinent to this section

In the "Lancet" of Nov. 16, 1867, occurs a good example of the influence of Joy succeeding Anxiety in inducing death, recorded by the registrar of Preston, Lancashire. The subject was a female, aged 43, the wife of an overlooker. It appears that the daughter of the deceased was travelling by railway when a collision occurred, which caused injury to a large number of passengers. Alarming reports concerning the accident had reached the mother as she was waiting at the station for her daughter, who soon arrived unhurt. The transport of joy, supervening on a state of mental anxiety, was more than her physical organization could bear. The mother after clasping her child in her arms, fell down in a fit, and expired twelve hours afterwards. In the medical certificate the case was returned as "apoplexy." It recalls the observation of Haller that "excessive and sudden joy often kills by increasing the motion of the blood, and exciting a true apoplexy." 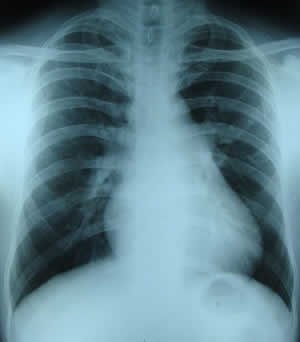 Side effect of other illnesses

Pulmonary hypertension can also be a side effect of other illnesses, for example, in scleroderma the incidence has been estimated to be 6 to 60% of all patients, in rheumatoid arthritis up to 21%, in systemic lupus erythematosus 4 to 14%, in portal hypertension between 2 to 5%, in HIV about 0.5%, and in sickle cell disease ranging from 20 to 40%.  Up to 4% of people who suffer a pulmonary embolism go on to develop chronic thromboembolic disease including pulmonary hypertension.  Note that the majority of these are caused by toxins, bacteria, viruses, heavy metals, pharmaceuticals and fungi, so the cause is actually common, you are just seeing multiple manifestations of the same ultimate cause.

Ultimately the person obtains spiritual experiences via hypoxia.  They may die from heart failure.