A puffball is a member of any of a number of groups of fungus in the division Basidiomycota.   They are called puffballs because a cloud of brown dust-like spores is emitted when the mature fruiting body bursts.

Puffballs are not hallucinogenic.

The belief that the spores of puffballs are hallucinogenic if breathed into the lungs, has no basis in reality. This erroneous belief resulted in the hospitalisation of some children from Wisconsin who had breathed in so many spores so deeply that they germinated in the lungs. 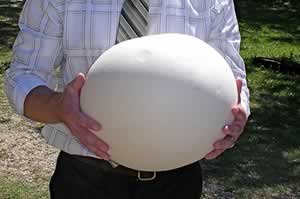 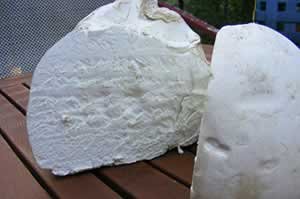 At the last count there were 50,000 different mushrooms, moulds, rusts and yeasts scavenging their way round the world.  Most text books call them plants, but none have chlorophyll.  They live more like animals, descending on and attacking their food with powerful digestive juices.
Although some are quite large, none are multicellular, consisting instead of a mass of protoplasm which flows along inside a threadlike cover that invades the body substance of their chosen prey.
Parts of this may break off and waft away to new feeding grounds, but between meals most species take to the air in the form of minute spores, just twenty five times larger than the average bacterium, which are produced on fruiting structures that rise above the dead air near the ground, and are usually far more colourful and conspicuous than the rest of the organism.
Mushrooms toadstools and puffballs are good examples of the elaborate launch pads devised by these wind conscious creatures…………..
Even an ordinary edible mushroom can release up to 3,667 million spores… the shaggy mane mushroom … produces an estimated 5,420 million spores.  But the world record goes to the giant puffball … that holds as many as 7,000 thousand million tiny missiles.

How it got its reputation

Puffballs are edible when young & when still fleshy-white within, though inedible once they've darkened & begun to go to spore. If they are eaten once they begin to reach the spore stage, they can be very mildly poisonous. Unlike other mushrooms, they are nearly impossible to keep fresh longer than a day, as the toxic spoors will quickly develop inside them.

The puffball fungus is named Puckfist or Pooka’s foot and in Irish Cos-a-Phooka.  This name is surprisingly similar to the name Puck.  And I found that the same ‘spirit’ has similar names in other parts of the UK and Europe – Pouke, Pug, Pake, Puke [Iceland], Puk [Friesland], Pooka [Irish], Pixie [Devon, UK], Pwcca [Welsh].  In Scandinavia the spirit is called spoke or spoge or spuk [similar to spook].

The character of this sprite or spirit is tied up in its name.  The anglo saxon word Poecan means to deceive or seduce, the low saxon Picken to gambol and play the fool and the Danish Pukke means to scold.  Thus a somewhat mischievous agile sprite that deceives and scolds you.

So poison yourself on this fungus and you see Puck.

It doesn’t BUT, and this is pure supposition, it did occur to me that if the puffball fungus was eaten regularly in the middle ages, but not eaten on the day it was picked, it could have made people ill from poisoning– possibly delirious and delirium causes hallucinations.  In this case the ‘spirit of the puffball’ may have been seen….. Puck!

It is also worth adding that there is a similar mushroom that looks like a puffball called the Scleroderma, one of the earth balls, a poisonous lookalike, again if eaten it could easily have caused delirium. The smaller puffballs can also be mistaken for buttons of the “death angels”, Amanita bisporigera, Amanita virosa, and Amanita verna.

These cause both delirium followed by either a near death experience or death. 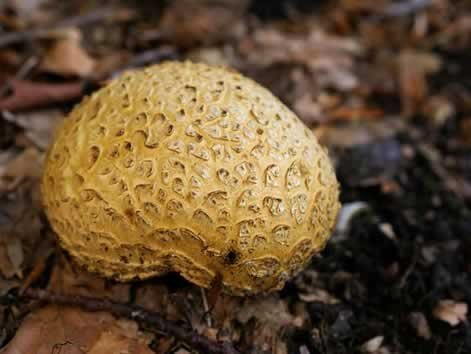