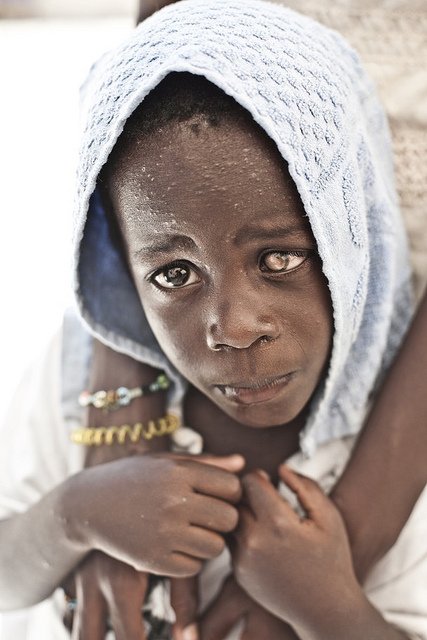 Onchocerciasis, also known as River Blindness, affects about 18 million people around the world, resulting in severe visual impairment or blindness for approximately 2 million.

The disease occurs in 37 countries, of which 30 are found in Africa - the most affected in terms of the distribution and the severity of the clinical manifestations of the disease.

The disease is transmitted through the bite of a tiny black fly, which breeds in fast moving rivers and streams. The fly injects immature forms of the parasite worm, Onchocerca volvulus, whose microfilariae migrate to superficial tissues, and may invade any part of the eye and ocular structure.

Living worms are not the ones causing most damage, their death triggers a localized inflammation which can lead to blindness. Sclerosing keratitis, a severe corneal involvement, is the major cause of blindness from the disease.

The World Health Organization (WHO) Expert Committee on Onchocerciasis has estimated that the disease is found in Africa, Yemen and Latin America. The disease is common in 30 African countries, six Latin American countries, and Yemen.  In Latin America, it is found in 13 foci located in 6 different countries. The epidemiologically most important focus of onchocerciasis in the Americas is located in a region spanning the border between Guatemala and Mexico. However, the Amazonian focus straddling the border of Venezuela and Brazil is larger in overall area because the Yanomami populations are scattered over a very large geographical region.

Substantial efforts are currently underway to control the disease in both Latin America and equatorial Africa. 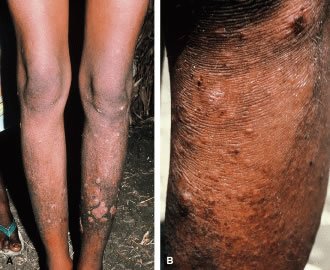 The parasite is also able to get into the brain where it can cause various forms of epilepsy.

Seizures occur frequently and may be difficult to control.

Nodding syndrome is a devastating neurological disorder, mostly affecting children in eastern Africa. An estimated 10000 children are affected. Uganda, one of the most affected countries, set out to systematically investigate the disease and develop interventions for it. On December 21, 2015, the Ministry of Health held a meeting with community leaders from the affected areas to disseminate the results of the investigations made to date. …A definitive aetiological agent has not been established, but … a consistent epidemiological association has been demonstrated with infection by Onchocerca volvulus. PMID:  26987477 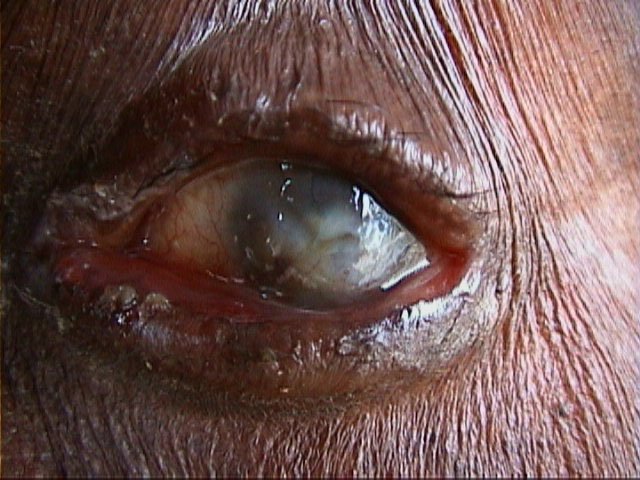 The WHO Expert Committee on Onchocerciasis estimated that in 1995 of the 17.7 million persons infected, about 270,000 were blind and another 500,000 severely visually impaired.

The disease is responsible for 1 million DALYs. The disability-adjusted life year (DALY) is a measure of overall disease burden, expressed as the number of years lost due to ill-health, disability or early death.  Eye disease from onchocerciasis accounts for 40% of DALYs annually. 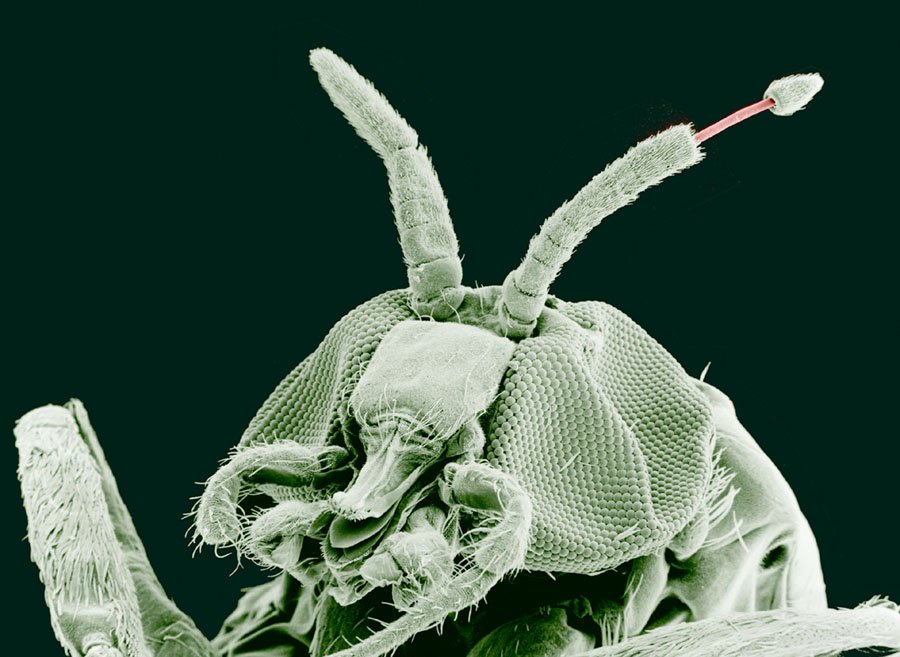 the parasite emerges from the antenna of the fly

Onchocerciasis is caused by infection with the filarial parasite Onchocerca volvulus.

The infection is spread through the bites of an insect vector, black flies of the genus Simulium.

In Africa, the major vectors are members of the S. damnosum complex, while numerous species serve as vectors of the parasite in Latin America.

Both Latin America and Africa have programmes in place to prevent River blindness.  Latin America, however, has had a long history of attempts to control onchocerciasis, stretching back almost 100 years.

In 1988, a new drug, ivermectin, was introduced that effectively killed the larval stage (microfilaria) of the parasite in infected humans. As the microfilaria is both the stage that is transmitted by the vector fly and the cause of most of the pathologies associated with the infection, ivermectin opened up a new strategy for the control of onchocerciasis.

Concurrent with the use of ivermectin for the treatment of onchocerciasis, a number of sensitive new diagnostic tools were developed (both serological and nucleic acid based) that provided the efficiency, sensitivity and specificity necessary to detect and then monitor the decline and eventual elimination of onchocerciasis as a result of successful control.

As a result of these advances, a strategy for the elimination of onchocerciasis was developed, based upon mass distribution of ivermectin to afflicted communities for periods lasting long enough to ensure that the parasite population was placed on the road to local elimination.

This strategy has been applied for the past decade to the foci in Latin America by a programme overseen by the Onchocerciasis Elimination Program for the Americas (OEPA). The efforts spearheaded by OEPA have been very successful, eliminating ocular disease caused by O. volvulus, and eliminating and interrupting transmission of the parasite in 8 of the 13 foci in the region.

The main pharmaceutical used to treat River blindness is Ivermectin.  Ivermectin is a broad-spectrum antiparasitic agent, traditionally used against parasitic worms. It is mainly used in humans in the treatment of onchocerciasis (river blindness), but is also used against other worm infestations (such as strongyloidiasis, ascariasis, trichuriasis, filariasis and enterobiasis), and some epidermal parasitic skin diseases, including scabies and head lice.

Ivermectin is a macrocyclic lactone derived from the bacterium Streptomyces avermitilis. Ivermectin kills by interfering with nervous system and muscle function, in particular by enhancing inhibitory neurotransmission.  The drug, theoretically binds to glutamate-gated chloride channels (GluCls) in the membranes of invertebrate nerve and muscle cells, causing increased permeability to chloride ions, resulting in cellular hyper-polarization, followed by paralysis and death.

The drug rapidly kills microfilariae, but not the adult worms. A single oral dose of ivermectin needs to be taken annually for the 10–15-year lifespan of the adult worms.

Ivermectin is currently being used to help eliminate river blindness (onchocerciasis) in the Americas, and to stop transmission of lymphatic filariasis and onchocerciasis around the world in programs sponsored by the Carter Center.

Ivermectin does have its limitations and as a consequence additional strategies are being explored to supplement the drug. Interestingly one of the limitations of ivermectin is not cost.  The donation of ivermectin (Mectizan) by Merck & Co. Inc., in 1988 ensured that for the vast majority of afflicted people ivermectin was free.

In certain people it has had side effects – the list below comes from eHealthme, Stromectol is the trade name in the USA

Most common Stromectol side effects

Community Directed Treatment with ivermectin is the cornerstone of many of the current efforts to eliminate onchocerciasis. However recent studies suggest there are places where long-term annual distribution of the drug has failed to ensure elimination targets are reached.  And one of the reasons people do not take the drug is the side-effects they had or saw other people have.

A study conducted in the western region of Cameroon in 2011 revealed that two health districts remained with a high prevalence of infection, despite long-term distribution of ivermectin since 1996.

Compliance was reported at 71.2%. The key factors related to compliance in the most recent round related to either programmatic and delivery issues, primarily absenteeism at the time of the campaign or alternatively individual determinants. An individual's experience of side effects in the past was strongly associated with non-compliance to ivermectin. PMID:  27529622

Ivermectin kills the parasite by interfering with the nervous system and muscle function, in particular, by enhancing inhibitory neurotransmission. The drug binds to and activates glutamate-gated chloride channels.

These channels, present in neurons and myocytes, are not invertebrate-specific, but are theoretically protected in vertebrates from the action of ivermectin by the blood–brain barrier.

There is also an environmental cost, which is still being assessed.  Dogs can be severely affected by ivermectin as can tortoises and cause death in both.  There are also some concerns about fish:

Gilthead sea bream Sparus aurata is the most commercialized Mediterranean aquacultured fish species. Ivermectin has recently (experimentally) started to be used to control ectoparasitic infestations in Mediterranean cultured marine fish. The potential hepatotoxicity of ivermectin was investigated in gilthead sea bream juveniles (35g) following oral administration at the recommended dose of 0.2 mgkg(-1) fish for 10d. …. The results obtained showed significant changes in the expression of 36 proteins respect to the control group. Among these proteins, six increased in abundance, and 30 decreased. PMID:  20451238

There are other papers on PubMed showing that cattle given ivermectin have dung which does not degrade normally.  The other concern relates to run-off from pasture land

The antiparasitic ivermectin is of particular concern to regulatory agencies. Ivermectin can reach the environment through the direct emission of dung from livestock on pasture and via manure application on agricultural lands.  A semifield study was conducted for assessing the ivermectin dynamic in runoff and drainage waters from dung-treated soils placed on experimental trays. …. The measured concentrations in water … and runoff particles …. were orders of magnitude higher than those provoking effects on aquatic and benthonic communities under experimental and mesocosm conditions, suggesting a clear risk for aquatic systems in the vicinity of pasture areas of treated animals or arable soil fertilized with its manure.  PMID:  21373858

Combine these findings with those of the fish and environmentally this area could be a real problem.

The logistics of administration

Ivermectin must be taken annually to sustain protection against blindness. There are significant logistic challenges for treatment of this disease, as most onchocerciasis endemic areas are remote with difficult access.  It is also clear that villagers feel much happier receiving the drug from a mobile unit than delivered by some local person, presumably because they had more faith in the mobile unit

….. During the last treatment round, members of the community assisted in the distribution of the ivermectin tablets in 69 (71.1%) of the 97 treated villages which were investigated. Only 26 (26.8%) of these 97 villages preferred community-based distribution of ivermectin to the 'mobile' method.

The lack of elimination of the Parasite

The drug ivermectin is only effective against the microfilarial stage and has minimal or no effect on adult worms. Adult Onchocerca volvulus can live for up to 15 years, reproducing and allowing the infection to persist in a population.

The life cycle of Onchocerca volvulus is quite complex and although blindness is one of the more obvious external symptoms, parasites in general do an inordinate amount of harm to the body as a whole.  They can damage the brain, the heart, the liver, the thyroid, the intestine and the stomach.  As such blindness may have been avoided, but other illnesses may not have.

We found that auranofin, a gold-containing drug used for rheumatoid arthritis, was effective in vitro in killing both Brugia spp. and O. ochengi adult worms and in inhibiting the molting of L3s of O. volvulus with IC50 values in the low micromolar to nanomolar range. PMID:  25700363 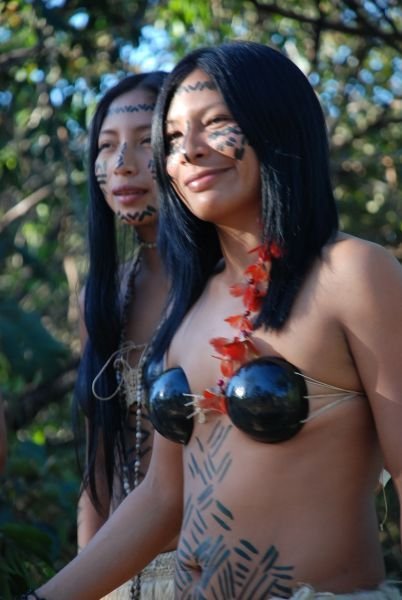 This site advocates the use of plants as a solution especially plants that are local to an area and thus which are free and accessible to the local populations.  Many indigenous populations already know these plants and use them, but this knowledge is seeping away under the onslaught of ‘modernisation’.  But plants may be a very important solution.  What is thus needed?

We have tried to find plant based solutions and have placed them in the observations.  Dr Duke’s phytochemical database also has an entry for plants that help in this area.

There is also a place to reuse the knowledge of local people on what repels these flies.  One of my friends was smeared with the juice of a local ant when he visited these parts and it worked. 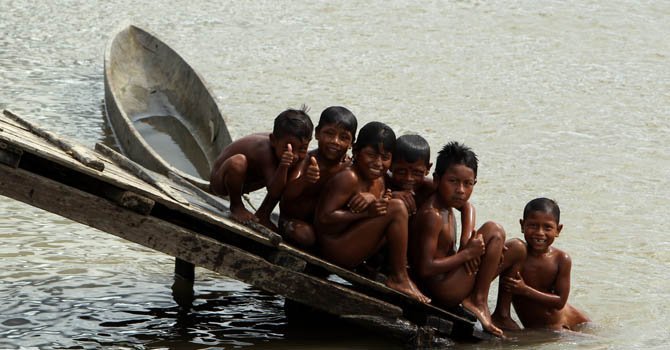