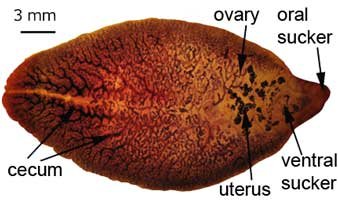 Fasciolosis is an important helminth disease caused by two trematodes Fasciola hepatica (the common liver fluke) and Fasciola gigantica.  Adult flukes of both species are localized in the bile ducts of the liver or gallbladder.

In Europe, the Americas and Oceania only F. hepatica is a concern.  F. hepatica measures 2 to 3 cm.

F. gigantica measures 4 to 10 cm in length and is found in the tropics in Africa, the Middle East, Eastern Europe and south and eastern Asia. 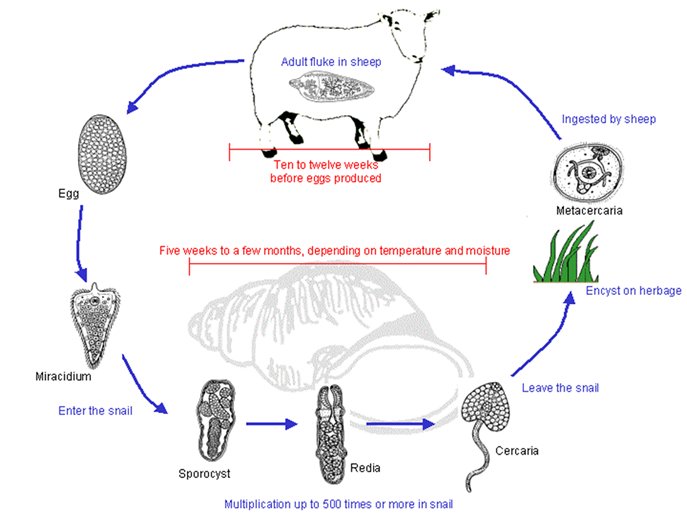 The definitive host range is very broad and includes many herbivorous mammals. Sheep are commonly infected and frequently die from infection.  Cattle, horses and goats are also hosts and die too.

Although other animals suffer, it is not normally animals from which we get the flukes, it is vegetation, of which more shortly.  Thus vegetarians are as susceptible, if not more susceptible than meat eaters - as long as the meat eaters cook their meat well, or freeze it before cooking.

The World Health Organization (WHO) has estimated that 2.4 million people are infected with Fasciola, and a further 180 million are at risk of infection.  In Europe, human fasciolosis occur mainly in France, Spain, Portugal, and the former USSR. France is considered an important human endemic area. A total of 5,863 cases of human fasciolosis were recorded from nine French hospitals from 1970 to 1982.  Several papers have referred to human fasciolosis in Turkey. 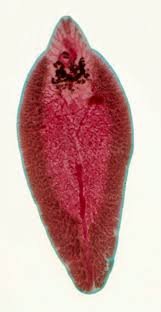 In North America, the disease is very sporadic. In Mexico, 53 cases have been reported. In Central America, fasciolosis is a human health problem in the Caribbean islands, especially in zones of Puerto Rico and Cuba. Pinar del Río Province and Villa Clara Province are Cuban regions where fasciolosis was hyperendemic. In South America, human fasciolosis is a serious problem in Bolivia, Peru, and Ecuador. These Andean countries are considered to be the area with the highest prevalence of human fasciolosis in the world. In the Northern Bolivian Altiplano, prevalences detected in some communities were up to 72% and 100% in coprological and serological surveys, respectively.  In Peru, F. hepatica in humans occurs throughout the country. In other South American countries like Argentina, Uruguay, Brazil, Venezuela and Colombia, human fasciolosis appear to be sporadic, despite the high prevalences of fasciolosis in cattle, which shows that animals are not the source for humans. 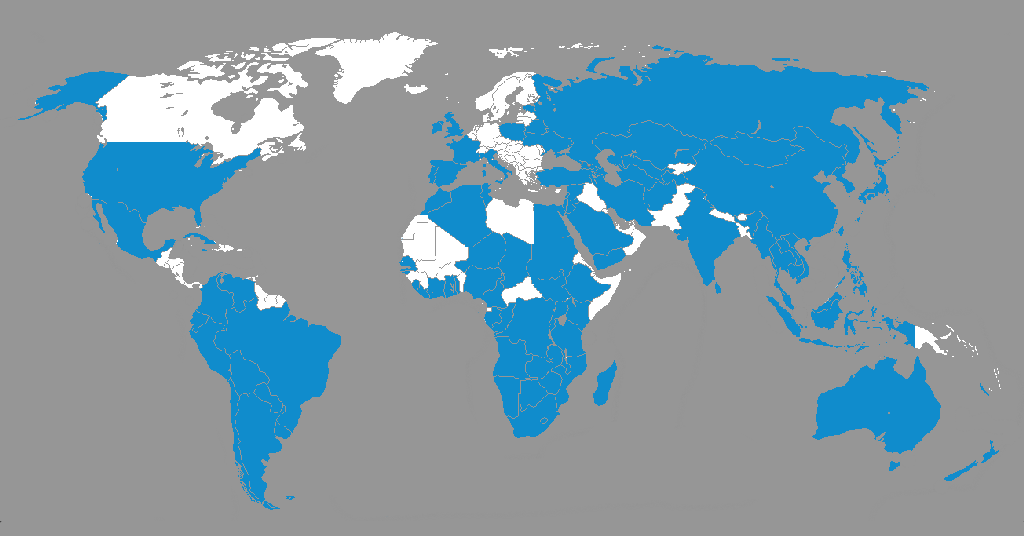 After ingestion, a migratory phase begins when excysted juvenile flukes penetrate the intestinal wall. After the penetration of the intestine, flukes migrate within the abdominal cavity and penetrate the liver or other organs, such as the lungs, diaphragm, intestinal wall, kidneys, and subcutaneous tissue.   During the migration of flukes, tissues are mechanically destroyed and inflammation appears around migratory tracks of flukes. This can take from a few days to several months.  Fever is usually the first symptom of the disease, along with abdominal pain, gastrointestinal disturbances: loss of appetite, flatulence, nausea, diarrhoea and occasionally cough, dyspnoea, chest pain, anaemia and jaundice. 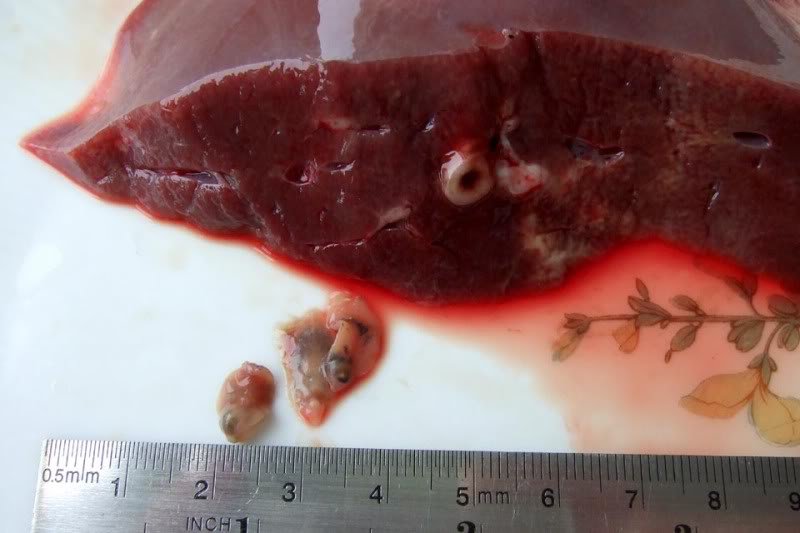 The second phase (the biliary phase) begins when parasites enter the biliary ducts of the liver. In biliary ducts, flukes mature, feed on blood, and produce eggs. Hypertrophy of biliar ducts associated with obstruction of the lumen occurs as a result of tissue damage.

The fluke may then remain passively in the bile duct. What may then follow is a Chronic or obstructive phase, months or years after initial infection. Adult flukes in the bile ducts cause inflammation and 'hyperplasia of the epithelium'. Hyperplasia means an increase in the number of cells or a proliferation of cells. It may result in the gross enlargement of an organ.  Given the effects, the result may be equivalent to a benign tumour or it may race away and we have cancer.

The resulting gall bladder malfunction and bile duct malfunction, combined with the large body of the flukes, are sufficient to cause mechanical obstruction of the biliary duct.
In this phase, biliary colic, epigastric pain, fatty food intolerance, nausea, jaundice, pruritus, right upper-quadrant abdominal tenderness, etc., are clinical manifestations indistinguishable from gall bladder or bile duct infection or gall stones.  The liver may be enlarged, as may the spleen.

So called fatty liver can be caused by parasites of which the liver fluke is one.  But since autopsies are rarely peformed on people who die from progressive diseases like this, the medical profession rarely know.  As such, diseases like this may actually be vastly underestimated.

Human F. hepatica infection is determined by the presence of the intermediate snail hosts, domestic herbivorous animals, climatic conditions and the dietary habits of man.

Sheep, goats and cattle were once considered the predominant animal reservoirs.

As more is known, however, researchers have found that donkeys and pigs contribute to disease transmission in Bolivia and that the peridomestic rat (Rattus rattus) may play an important role in the spread. 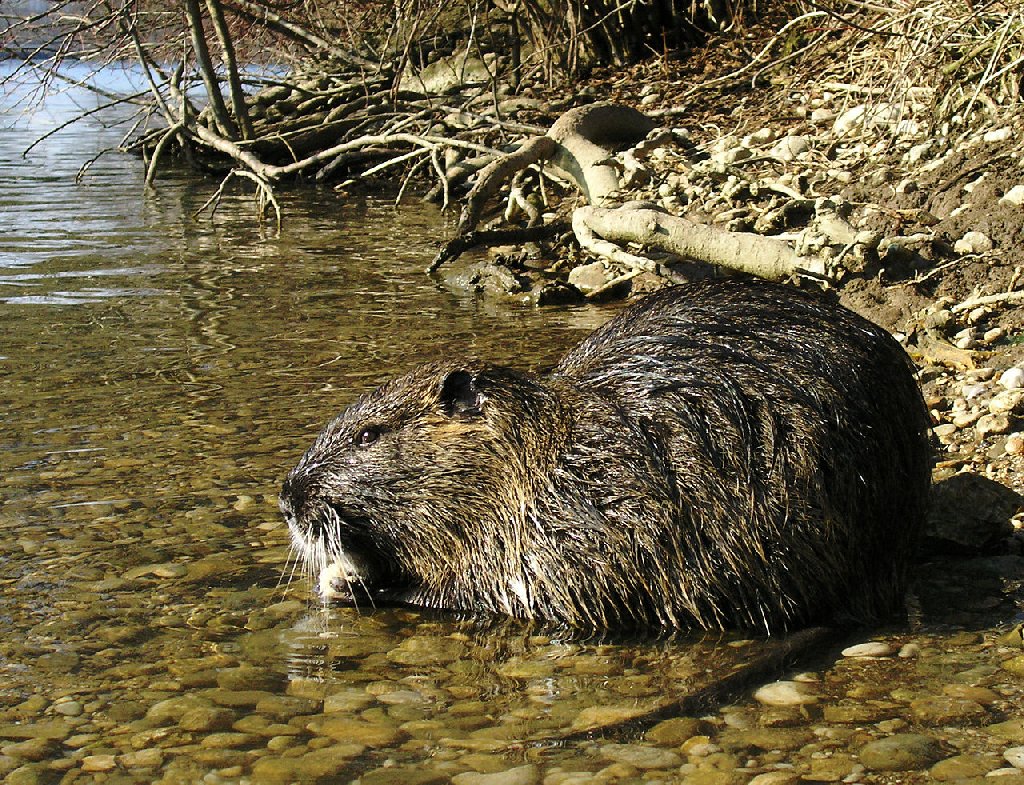 In France, the coypu (Myocastor coypus) was confirmed as a wild reservoir host of F. hepatica.

The coypu is an unwanted pest in France [and in East Anglia in the UK] as such if it is a host, we may well have an explanation for the high incidence of infection in France.

Humans are infected by ingestion of aquatic plants that contain the infectious cercariae. 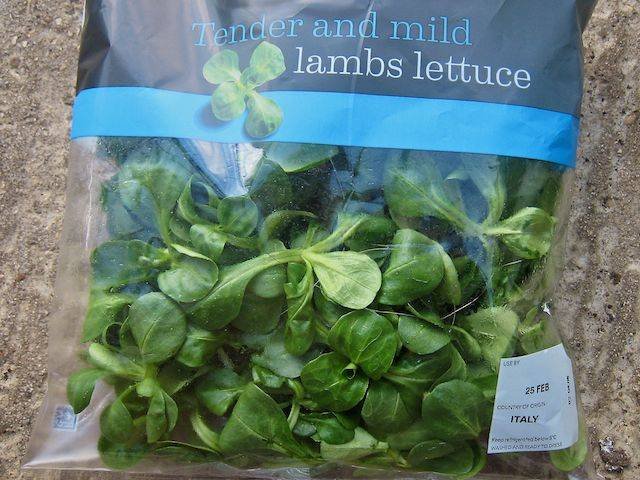 Several species of aquatic vegetables are known as a vehicle of human infection.  In Europe,

were reported as a source of human infections.  Again given the French people's liking for dandelions and lamb's lettuce, we may have an answer to the prevalence in France.

It is also possible to become infected from undercooked liver.  False fasciolosis (pseudofasciolosis) refers to the presence of eggs in the stool resulting not from an actual infection but from recent ingestion of infected livers containing eggs.

In the Northern Bolivian Altiplano, some authors suggested that several aquatic plants such as

could act as a source of infection for humans. 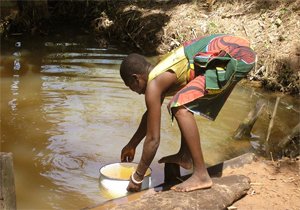 Installation of clean drinking water ought to be our priority

Because F. hepatica cercariae also encyst on water surfaces, humans can be infected by drinking untreated water containing cercariae.   Given that stagnant water is also a source of other parasitical and bacterial diseases, the priority should be in all countries to install clean running water supplies for drinking water and sewerage systems to ensure no cross contamination, as well as separation of animals from human habitation.

These simple measures could save a lot of lives. 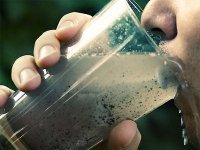 In humans, diagnosis of fasciolosis is usually achieved parasitologically by findings the fluke eggs in stool, and immunologically by ELISA and Western blot.

Coprological examinations of stool alone are generally not adequate because infected humans have important clinical presentations long before eggs are found in the stools. Moreover, in many human infections, the fluke eggs are often not found in the faeces, even after multiple faecal examinations.

Ultrasonography and biopsy of liver, and gallbladder punctuate can also be used.

The standard treatment is Anthelmintics.  These may be pharmaceuticals or plants.  More recently, an Egyptian drug made from myrrh, has been investigated as an oral treatment of trematode-caused ailments including fascioliasis

Wash all vegetables several times in clean fresh running water. Soaking vegetables in very salty water can help remove many snails and other creatures.  The water does have to be very salty for this to work.  For a demonstration of what salt does to a snail see What happens when you pour salt on a snail

Cook all meat - thoroughly.  Freezing meat before it is eaten also helps a great deal, as it kills off a large number of potential pathogens.

Drink only clean water - only ever drink clean freh water - it is possible to buy relatively inexpensive portable  water purification kits that can be used if you are on the move and the water supply looks dodgy.  Filter first then boil the water.  This is why tea is now such a popular drink in India - it uses boiled water and the tea itself has anti-parasitical properties.