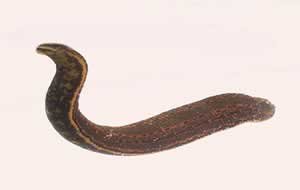 Most leeches are hematophagous - blood suckers that feed on blood from vertebrate and invertebrate animals.  There is an active anticoagulant component in leech saliva called hirudin, which from the leech's point of view makes it easier to suck the blood from its victim. 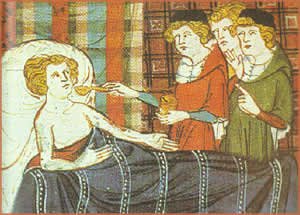 Leeches have been historically used in medicine for thousands of years.  In India one can trace the practice  as far back as 2,500 years ago, where it is explained in ancient Ayurvedic texts. Many other ancient civilizations also used leeches, including the Greek civilization.  Although the practice of 'leeching' can be traced to  India and Greece, it was used throughout Europe in the Middle Ages and continued well into the 18th and 19th centuries in both Europe and North America.

The use of leeches has sound scientific underpinnings.  When someone has surgery or an amputation or is wounded, it can produce what is called 'problematic venous congestion'.  In effect the veins get blocked up.  This condition is known in medical circles now as 'venous insufficiency.' If this congestion is not cleared up quickly, the blood will clot, arteries that bring the tissues their necessary nourishment will become plugged, and the tissues will die. If  leeches are applied to the wound, the anticoagulant in the leeches saliva thins the blood and stops it blocking the veins.  The wound then bleeds more, but the swelling in the tissues tends to subside and healing is aided by allowing fresh, oxygenated blood to reach the area.

Unfortunately, a sound medical practise became a sort of cure-all in medieval times.  Much as antibiotics are indiscriminately given to everyone for anything today with all the problems this causes, leeching or blood letting was given to anyone who had anything in the rather unsound belief that it would do good.

Why have people had spiritual experiences from leeches?  If you apply too many leeches to someone for too long, you will give them hypotension – low blood pressure.  Along with this low blood pressure they may also suffer from symptoms such as

Fever, lightheadedness, heart problems all cause hypoxia and hypoxia can give you a spiritual experience.

It is no accident that the people of the Middle Ages had so many visions, hallucinations and other intense experiences, leeches were a surefire way of making the already poorly, seriously poorly and suffering from hypoxia.

In the religious community, this was exacerbated by their tendency to meditate and  starve themselves [Starvation].   Lower blood pressure is a side effect of certain 'botanicals' – plants to you and me.  And plants were used extensively in the Middle Ages for reasons which were not always scientifically thought through.

There is every reason to believe that numerous saints as well as ordinary people had hallucinations and visions as a result of the bloodletting that occurred via the use of leeches, but on the whole, the cases themselves are not that well documented – in other words there aren’t many accounts which say – ‘today I had a treatment with leeches and a few hours afterwards I saw my first angel’!

But the case of Ignatius of Loyola is somewhat different.  Not only are his visions well documented, but the reasons for them and the links with medical intervention are fairly clear cut.  There is the advantage that there is a book ‘The Autobiography of Saint Ignatius Loyola’ from which we can draw the observations themselves. This autobiography has the added advantage that it was dictated by Ignatius himself.