Solanum, the nightshades, horsenettles and relatives, is a large and diverse genus of 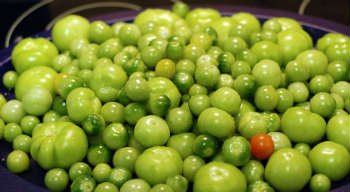 annual and perennial plants, including:

Some of the plants in the Solanum family have the most wonderful common names, which give a good idea of their toxicity, for example, Five-minute Plant [which is presumably all you have before you conk out], "apple of Sodom” , Goat Apple, Poison Apple, "bitter-apple" , Devil's Tomato, Sticky Nightshade, fire-and-ice, and Devil's Fig.

Solanine occurs naturally in many species of the genus Solanum. It occurs in the roots, leaves, stem, shoots and fruit. 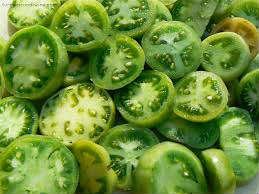 Tomatoes, on the other hand, have ‘Tomatine’ in the unripe green skins of the fruit and in the tomato leaves and vines. Tomatine is a glycoalkaloid similar to solanine. About 72% of the original amount of Tomatine, for example, remains after the preparation of ‘Southern fried green tomatoes’.

Tomatine is one of the tomatoes natural defences against being eaten by insects and other predators before it has produced seed. The tomato fruit is most vulnerable when it’s green, before the seed has formed, so the green tomatoes have more tomatine. It’s not needed by red tomatoes. As far as a tomato is concerned, once the fruit is ripe, it’s done its job of producing seeds. As we know if you eat a tomato, the seeds are passed in the faeces unharmed, so a tomato eaten at the red stage is being given a hand to spread.

It doesn’t!!, but there appear to be a number of panicking mums and people who think eating green tomatoes sends you to the fairies. So it is worth explaining the chemistry.

The ‘dose’ of any substance and its effects are dependent on body weight so a child is potentially more vulnerable than an adult. On the other hand, a child cannot eat as many green tomatoes as an adult! The approximate Tomatine level in tomatoes is:
0.87 mg tomatine per gram fresh weight, green
0.45 mg in yellow fruit
0.36 mg in red fruit

The LD50 (Lethal Dose for 50% death) is 0.5 g per kg of body weight, so a 170 pound man would have to consume enough green tomatoes to accumulate 36g of tomatine.

Since an average tomato weighs about 5oz (140 g), you're getting around 120 mg of tomatine in each green tomato. So that average-sized man would have to eat around 300 green tomatoes to reach this level.

Naturally, this number would be smaller for a child, but still - the number of green tomatoes (or amount of green tomato products) you'd need to eat to reach dangerous levels is incredibly high.

So you don’t get any form of instant experience by eating the tomatoes, but do it for long enough over some time and there may be another more insidious way that something does happen

Tomatine kills cancer cells, but it also kills ordinary cells, particulary those in the liver, so eating too many green tomatoes over time, could cause liver failure.

So there is – if you are an avid fan of green tomatoes, a very very remote possibility that you will get a spiritual experience via Liver disease – see the section on illnesses.