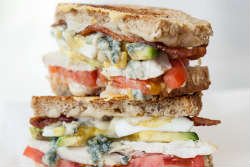 The observation that resulted in me creating this entry was intended to be a joke and it is a masterpiece of writing.  But after a bit of investigation I found it had its foundation in a serious effect of cheese in general.

It is not a myth that cheese produces more intense dreams - it appears to be true and it may be the milk, or it may be the mould and the yeasts and other fungi in or on the cheese.   Fungi produce elves as spirit beings in any visions, dreams or hallucinations that result!

If you overdose on anything, whatever chemicals are in that food or substance, are going to start having an effect on the body.

So eating a delicious blue cheese sandwich is going to have no effect, but gorge yourself on pounds and pounds of the stuff and it may have some rather interesting effects. [As long as you manage to keep it down and are not violently sick or have a cardiac arrest from all that fat].

One of the possible routes by which cheese of all sorts works is via tryptophan.  Cheese contains tryptophan, which is an amino acid not a drug!  Amino acids act as building blocks in protein biosynthesis and are essential for human life, they cannot be synthesized by the organism, and therefore must be part of our diet. Tryptophan, however, also functions as a biochemical precursor for Serotonin (a neurotransmitter), synthesized via tryptophan hydroxylase.  The disorders fructose malabsorption and lactose intolerance cause improper absorption of tryptophan in the intestine, reduced levels of tryptophan in the blood and can lead to depression, which should give us a clue as to what serotonin does.  Serotonin is associated with the opposite of depression which is why it is used in SSRIs. 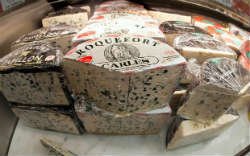 But like everything if you overdose things can go wrong.

The following study showed that taking vitamin B6  potentiates tryptophan

Effects of pyridoxine on dreaming: a preliminary study. Ebben M Lequerica A Spielman A; City College of New York, USA.
The effect of pyridoxine (Vitamin B-6) on dreaming was investigated in a placebo, double-blind study to examine various claims that Vitamin B-6 increases dream vividness or the ability to recall dreams. 12 college students participated in all three treatment conditions, each of which involved ingesting either 100 mg B-6, 250 mg B-6, or a placebo prior to bedtime for a period of five consecutive days. The treatment conditions were completely counterbalanced and a two-day wash-out period occurred between the three five-day treatment blocks. Morning self-reports indicated a significant difference in dream-salience scores (this is a composite score containing measures on vividness, bizarreness, emotionality, and color) between the 250-mg condition and placebo over the first three days of each treatment. The data for dream salience suggests that Vitamin B-6 may act by increasing cortical arousal during periods of rapid eve movement (REM) sleep. An hypothesis is presented involving the role of B-6 in the conversion of tryptophan to serotonin. However, this first study needs to be replicated using the same procedures and also demonstrated in a sleep laboratory before the results can be considered certain.  PMID: 11883552

So to a large extent, if we overdose on cheese we are overdosing on serotonin! [for the effects here see what happens with overdose of SSRIs]