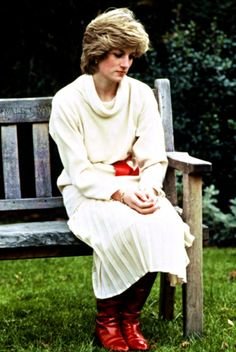 Diana Princess of Wales. She said in an interview that
she practised bulimia and self mutilation for years.
This was taken at Kensington  Palace gardens in 1983.

There is a highly complex set of definitions and terms which have been constructed around Bulimia Nervosa.  This is because psychiatrists wish to have these definitions so that they can use pharmaceuticals.

Woe betide you if you are an anorexic and let slip you gave in to the massive hunger you were feeling and ate something.

You are then described as having undertaken ‘binge eating’.  If you then think ‘bu**er I’ve eaten when I shouldn’t have’ and use laxatives or make yourself sick, then you are a fully fledged bulimic nervosa patient and they will be onto you as soon as say ‘cruise liner’ or 'free holidays'. 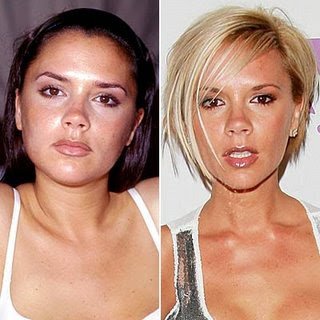 Victoria Beckham before and after .... who to believe?  The trash
press say she is a bulimic,  her fans say she's not

A person with Bulimia nervosa is in reality a person with anorexia nervosa, who was so hungry at one point that they gorged themselves with food to get rid of the hunger pangs.  Only in the cold light of day, to realise this had defeated their whole project.  They then make themselves sick [vomit] or take an overdose of laxatives in a desperate attempt to get back on track.

The term bulimia comes from Greek βουλιμία boulīmia, "ravenous hunger", a compound of βοῦς bous, "ox" and λιμός, līmos, "hunger";  which sums it up.  The only difference between a bulimic and  an anorexic is that they do not have quite the iron will of the anorexic, or the necessary imagination to create diversionary activities.

Thus for all observations and a full explanation of Bulimia Nervosa, see Anorexia.

Some saints who developed anorexia as a result of a life of asceticism, may also have displayed Bulimic behaviors.  Saint Mary Magdalen de Pazzi (1566–1607) and Saint Veronica Giuliani (1660–1727) were both observed binge eating—giving in, as they believed, to the temptations of the devil.   Saint Catherine of Siena (1347–1380) is known to have supplemented her strict abstinence from food by purging as ‘reparation for her sins’. Catherine died from starvation at age thirty-three.