In our researches in the 'thirties, experiments at different distances employing the hypnogenic method were carried out as follows:

The sender left the laboratory and went to another floor of the same building or to another neighbouring house (20 to 50 m), or into the street (walking away from the Institute for Brain Research for distances ranging from 500 to 4,500 m). An observer remained with the subject.

In some cases the subject was in another part of the town-on the premises of the Psychotherapeutic Dispensary, i.e. at a distance of 7,700 m from the laboratory of the Institute for Brain Research where the sender was. The subject could not know and indeed did not even suspect that an experiment was being carried out with her, and the observer only knew the time at which suggestion would begin very approximately.

These experiments were carried out with Ivanova; Tomashevsky and Dubrovsky acted as senders.

Under these conditions which, so it would seem, completely ruled out the possibility of any identifying signals, mental suggestions of sleeping and waking were effected, often with the same speed as if the sender were in the same room as the subject.

The success of these experiments led to our setting up experiments at very great distances-from Sebastopol to Leningrad, about 7,700 km in a straight line.

Prior to leaving for Sebastopol the sender (Tomashevsky) agreed in advance with Dr. Dubrovsky as to the day and hour of the experiments. On July 13th Ivanova came to the Psychotherapeutic Dispensary as usual at 5 o'clock and remained there until 7 P.M.. However, during the time which had been agreed for the experiment no telepathic transmission came from Sebastopol because the sender fell ill; he was running a temperature. Ivanova,who was during the entire time under Dr. Dubrovsky's observation, showed no sign of sleepiness.

On another occasion, on July 15th, the same subject again came to the Dispensary at about 10 o'clock (the arranged time). At 10:10 the sender began to exert mental suggestion. At 10:11 P.M. a hypnotic condition of the subject was noted. At 10:40 the sender started mental awakening. Precisely at 10:40, as was subsequently established by a comparison of the experimental reports, the subject came out of hypnosis. It should be added that on days for which experiments were arranged, sender and observer checked their watches by radio with Moscow time.

At the time of mental suggestion the sender was alone on the sea front promenade. It was dark. Dr. Kaialov acted as observer of the subject. He had never previously experimented with Ivanova and he knew neither the purpose of the experiment nor the sender’s plans. Kaialov conducted the observations at the suggestion of Dr. Dubrovsky who had taken part in deciding on the days and hours of the experiment.

The results of all these experiments are given in Table 17. In order to understand this table clearly one must take into account that, in experiments 2 to 5 and7, experiments in mental awakening only were carried out (the subject having been put to sleep by the observer by means of verbal suggestion) 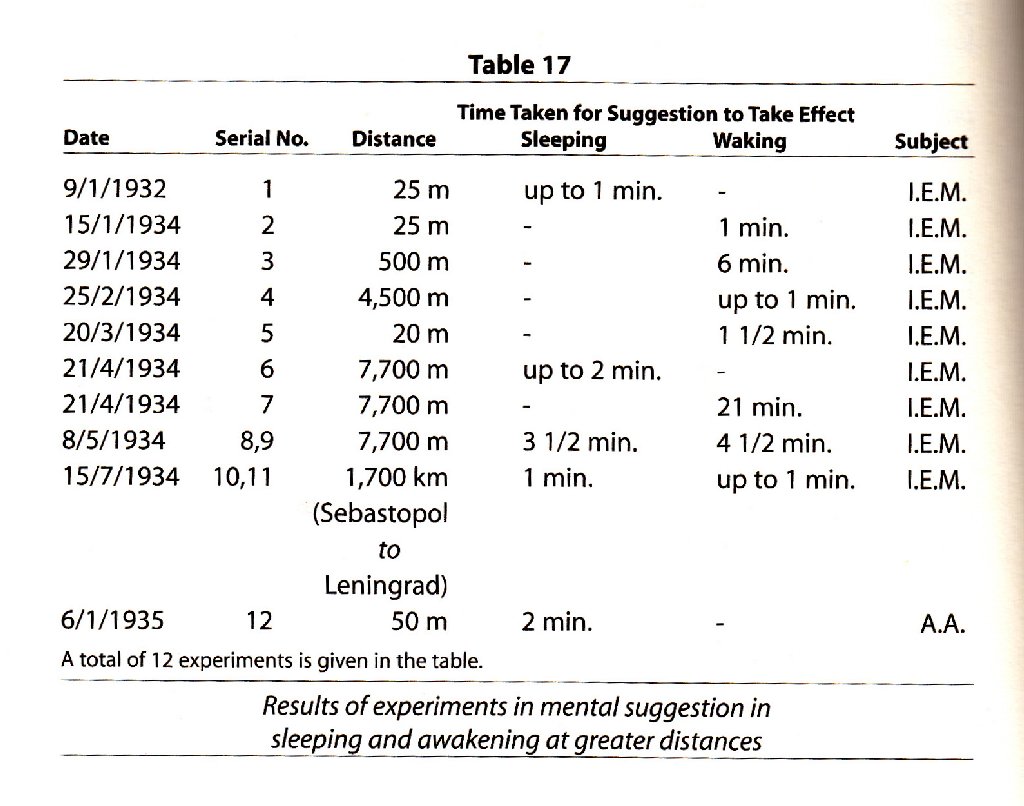 In experiments 1, 6 and 12 the sender only put the percipient to sleep, the observer waking her up by verbal suggestion. On July 15th the sender carried out two experiments, 10 and 11; he first mentally put the subject to sleep and then woke her up again mentally.

Analysing the results of our experiments at various distances, we find that these results are almost identical with those obtained at short distances, from one room to another. The experiment of April 21st, 1934, in which 21 minutes were required for compliance with mental suggestion is an exception.

Natural obstacles such as the curvature of the earth's surface, hills etc. do not affect the phenomena.