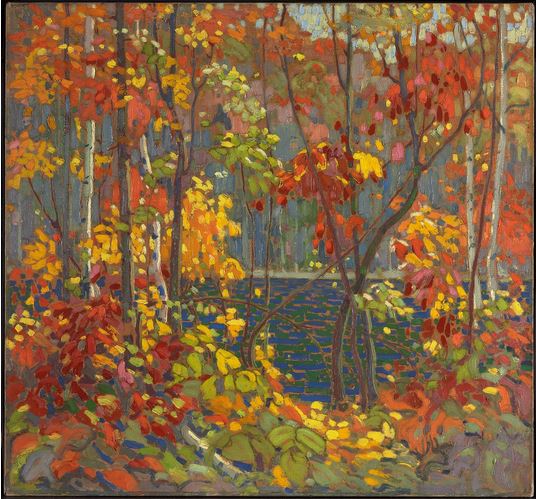 Sunlight falls on a forest scene. The brilliant autumn foliage of birch and maple screens a view of lake, hills and sky. In the foreground is dense undergrowth. The sunlit colour dazzles – ranging from dark reds through oranges and pinks to the deep greens and blues of shadows. The scene is one of great tranquillity, of nature perceived so acutely by the painter that its representation is arresting.

It is one of Tom Thomson’s most famous paintings, The Pool, Winter 1915–16 (1915-1916.25) .  A great favourite of Canadians, it is reproduced in innumerable books, classrooms, hotels and hospitals, to say nothing of one-thousand piece jigsaw puzzles. Thomson painted it from sketches he had made in Algonquin Park, as the essence of what he identified with Canadian nature. The subtle and elegant ways in which Thomson plays colour off colour and contrasts form against form distinguish him immediately as a painter with his own style and emotional tone.

Is the scene a depiction of an actual spot or an invention using motifs he had found? We do not have much in the way of written documents to answer the question. Thomson’s trajectory as a painter condensed a tremendous range of physical and emotional energy into an unbelievably short amount of time. He painted the first works recognized by his peers as important in 1912. In 1917, he died at age thirty-nine, leaving behind the body of work recorded here.

In painting landscape, Thomson had the idea that an accurate representation of nature meant honesty and truth. If we look again at The Pool, we see that what is constant is the information in the work. It’s what Thomson focuses our eyes on: the slim verticals of the birches, the graceful young trees which crisscross in diagonals, the lush foliage and bushes ablaze with colour, the light flashing out from more muted areas. As in so many of his landscape paintings, the colours sing.