Part of the adventure in the story of the formation of the Group of Seven, however, was the reaction of Thomson’s friends, artists he considered his peers, and the way in which they helped him turn his sketches into a major painting – his first.

These artists, recognizing in Thomson’s small sketches of 1912 a new imagery and way of handling it, drew together to help him transform his work into his first professional painting, Northern Lake, Winter 1912–13 (1912-1913.01) . A new friend of Thomson’s, A.Y. Jackson, whom he had met late in 1913, influenced Thomson at this point. He selected a sketch from the group Thomson had painted as the one to serve as a catalyst towards a larger work Northern Lake, Spring or fall 1912 (1912.17) , probably because of its simple, effective composition. Thomson’s finished painting shows much the same view of a lake framed by trees to either side; though now in the foreground lie huge boulders over which we must look to see wind-blown water, distant shoreline and sky. The result is far more dramatic than the sketch, and a far better painting.

The creation of this powerful, assured painting meant a huge step forward for Thomson. It comes as no surprise that the work, shown in the spring exhibition of the Ontario Society of Artists, was judged of sufficient merit to be purchased by the Education Department of the Government of Ontario (today it is in the collection of the Art Gallery of Ontario, Toronto).

Northern Lake was a marker on Thomson’s path. Because of his success, he decided to paint full-time and asked for a leave of absence from his commercial art firm for a trip north. That summer, he returned to Algonquin Park to paint. By the following winter, he had joined Jackson in studio number one in the new Studio Building in Toronto, built by Harris and Dr. J.M. MacCallum, an ophthalmologist and his patron, to encourage and accommodate artists – mostly those of the new movement that was forming. 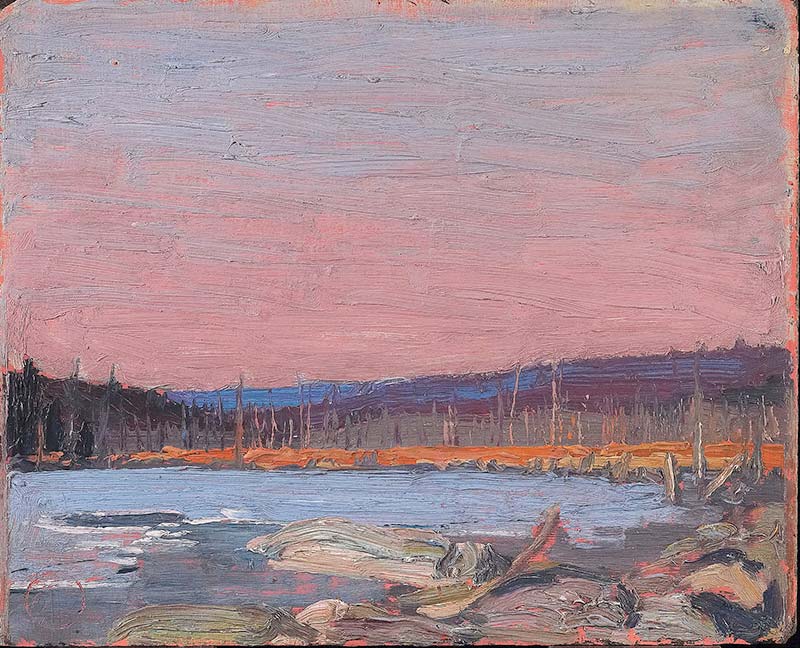