The next step in Thomson’s development occurred after two camping trips he took in 1912, the first to Algonquin Park, the second to canoe the Mississagi River, west of Sudbury, Ontario. On both trips, as was his habit when he fished, he painted. The sketches he made, such as Mississagi, 1912 (1912.29) , of water and shoreline, were of tremendous importance to his peers, who recalled these dark, but truthful works as a record of rough bush country. Later, these early efforts by Thomson were regarded as the first stirrings of the movement that would become known – three years after Thomson’s death – as the Group of Seven.

Other sketches painted the previous spring and the following summer when he visited Algonquin Park, show that he saw the place in which he painted as a world of rhythmic repeats, of trees, bush and lake at different times of day and different seasons. The land had been heavily logged and he painted its fallen trees with meticulous care, as in Fallen Timber, 1912 (1912.02) or Forest Interior, 1912 (1912.06) . Sky and water also receive careful attention, as do the trees and boulders at the water’s edge as in Northern Lake, 1912 (1912.15) , Lake Scene with Boulder, 1912 (1912.18) and Pine Stump and Rocks, 1912 (1912.22) .

The reason the sketches were of such interest to this nascent group is that their subject matter provided a way to break with Academic art. The group was attracted by the idea of developing an art that expressed qualities in Canadian nature they saw as sympathetic to themselves – rougher, bolder, wilder and more northern – than the country recorded by earlier painters. Lawren Harris, a friend of Thomson since 1911 when they met at a show of MacDonald’s, had written that year in a magazine that what was needed by artists was a new version of Canada: “…a true Canadian note, not so much in choice of subject as in the spirit of the thing done.”

Thomson’s work was thought to embody that spirit. 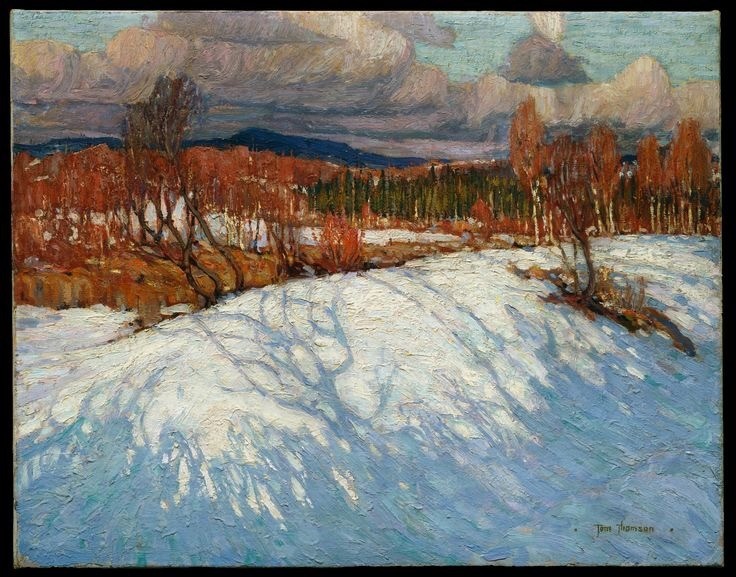