The neurological complications of chikungunya virus: A systematic review 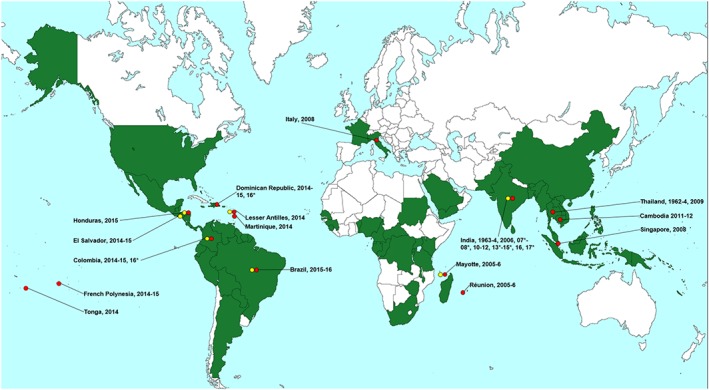 We performed a systematic review on the neurological complications of chikungunya virus. Such complications are being reported increasingly, owing primarily to the scale of recent epidemics but also to a growing understanding of the virus' neurovirulence. We performed a thorough literature search using PubMed and Scopus databases, summating the data on all published reports of neurological disease associated with chikungunya virus. We appraised the data for each major condition in adults, children, and neonates, as well as evaluating the latest evidence on disease pathogenesis and management strategies. The review provides a comprehensive summary for clinicians, public health officials, and researchers tackling the challenges associated with this important emerging pathogen.
Keywords: acute disseminated encephalomyelitis, chikungunya, complications, congenital infections, encephalitis, Guillain‐Barré syndrome, myelitis, neonatal infection, neurological, optic neuritis, retinitis, uveitis

Chikungunya virus is an alphavirus (genus Alphavirus, family Togaviridae) that is primarily transmitted to humans by Aedes mosquitoes, and occasionally from mother to child. The word “chikungunya” originates from the Makonde language, spoken in Tanzania and Mozambique, meaning “that which bends up”1; this refers to the debilitating arthralgia often occurring in the acute phase of infection, along with fever, myalgia, headache, and rash. Although the first outbreaks were described in the 1960s, the virus was not considered a major public health problem until 2004, when it caused explosive outbreaks in the tropics. Severe complications of chikungunya infection, including neurological disease, are being recognised increasingly.

Classically, alphaviruses are described in 2 groups—the “old world” viruses, including Sindbis, O'nyong'nyong, and Ross River viruses, which cause a predominantly arthritic syndrome, and the “new world” viruses, including Eastern, Western, and Venezuelan equine encephalitis viruses, which are responsible for outbreaks of encephalitis.2 Chikungunya virus is now recognised as a cause of both arthritic and neurological diseases throughout the tropics.

Dengue and Zika are also arthropod‐borne viruses (arboviruses) that, like chikungunya, are transmitted by Aedes mosquitoes but are flaviviruses (genus Flavivirus, family Flaviviridae). All 3 arboviruses cause an initial fever‐arthralgia‐rash syndrome and are associated with neurological complications.3, 4, 5 Given increasing reports of cocirculation and coinfection of the 3 arboviruses in the Americas,6 the underlying viral aetiology in patients presenting with arbovirus‐associated neurological disease is not always clear. Therefore, understanding the similarities and differences between chikungunya‐, Zika‐, and dengue‐associated neurological diseases is of importance and will be addressed in this review.

We performed a systematic review for evidence of neurological disease associated with chikungunya virus. A well‐designed review was recently published on this topical subject7; our review approaches the disease spectrum in a different manner, accounting for the differences. Here, we use a broader search strategy, leading us to consider general features of the virus and disease before individually discussing the different neurological manifestations, the challenges in their diagnosis, sequelae of perinatal infection, and knowledge of the underlying disease mechanisms; we include comparison with Zika and dengue viruses throughout. Where provided, we present all data detailing the clinical information, investigations, management, and outcome for all cases described in the literature.

7. NEUROLOGICAL MANIFESTATIONS
The literature on neurological manifestations of chikungunya reflects that of the disease activity itself, with 5 publications between 1964 and 1971 and 89 since 2005, comprising 27 case reports, 48 case series, 1 case‐control study, 3 cohort studies, 1 cross‐sectional study, and 14 pathogenesis studies (Figure 1); autopsy data were included in one report found.34 Table 2 provides a summary of all cases of reported chikungunya‐associated neurological disease. In total, we found 856 cases of chikungunya‐associated neurological disease in the literature; 796 (93.0%) were in adults and children infected directly via mosquito, 60 (7.0%) were in neonates infected vertically from mother to child (Figure 2). Because patients were investigated to variable extents, we have categorised them according to the presenting clinical syndromes of encephalopathy, myelopathy, neuropathy, combinations of these, and neuro‐ocular disease; we then provided diagnoses, treatment, and outcome where available. A limitation of our study was that we could not incorporate diagnostic criteria, given the range of information available amongst all the cases published. The most common clinical presentation of neurological disease associated with adult and child chikungunya infection was encephalopathy; it accounts for 322 (40.5%) of the 781 patients described. Excluding ocular disease, 474 (77.3%) of all adult and child cases had a pure CNS disorder, 82 (13.4%) had a pure peripheral nervous system disorder, and 57 (9.3%) had a disorder of both the CNS and peripheral nervous system. Cases in which coinfection of chikungunya with another neurovirulent arbovirus was detected are not included in Table 2 but are further discussed below.

7.1. Encephalopathy and encephalitis
Encephalopathy, defined by the International Encephalitis Consortium as “a clinical state of altered mental status, manifesting as confusion, disorientation, behavioural changes or other cognitive impairment,”51 is one of the most common neurological presentations for arboviral infections. Whilst in some patients this may be due to encephalitis—ie, brain inflammation associated with direct viral infection—in others, it may be a non‐specific manifestation of a severe systemic disease, for example, due to hypoperfusion of the brain.3, 5, 104 Strictly speaking, encephalitis is a pathological diagnosis, but for practical purposes, it can be diagnosed in an encephalopathic patient if there is surrogate evidence of brain inflammation, for example, from a CSF pleocytosis, brain imaging, or focal changes on electroencephalogram.2, 5

In one study from Réunion Island, where the authors were careful to accurately define encephalitis using the international criteria, the estimated cumulative incidence rate for chikungunya‐associated encephalitis was 8.6 per 100 000 people during the 2005 to 2006 outbreak, which led to a 2‐fold increased incidence of all encephalitis in the region.37 Twenty‐four patients with encephalitis were reported (5 of whom were neonates infected perinatally), presenting with altered mental status, as well as seizures and focal neurological signs in some. When compared with encephalopathic patients who did not meet criteria for encephalitis, the encephalitic patients had more severe CNS disease and required more intensive care support; this was despite there being no significant difference between chikungunya viral loads and IgM titres in the serum or CSF, which may indicate a role for predisposing host factors in chikungunya virus neurovirulence. Overall, our literature review revealed that 251 of the 322 (78.0%) patients who presented with an isolated encephalopathy syndrome had a diagnosis of encephalitis, whereas 66 (20.5%) and 2 (0.6%) had a diagnosis of encephalopathy and acute disseminated encephalomyelitis, respectively. Additionally, involvement of the meninges was also reported in 55 (17.1%) cases.

Symptoms of encephalitis begin between 0 and 13 days following the onset of systemic features of infection (see Table 2). As is the case in other arboviral encephalitides, a CSF pleocytosis is not always seen.40, 41 Unlike encephalitis caused by other CNS pathogens such as herpes simplex virus and cytomegalovirus, which have characteristic imaging abnormalities, chikungunya encephalitis in adults and children does not appear to show a distinct pattern. Described abnormalities include oedema or non‐specific haemorrhage on computed tomography, and increased T2+/− fluid‐attenuated inversion recovery signal (Figure 4) or restricted diffusion signal in several areas of the cerebrum on magnetic resonance imaging (MRI).34, 40, 44 Many cases do not show any imaging abnormalities at all.37, 40 Although there are non‐specific slowing of brain waves in some patients, there is no specific electroencephalogram pattern.40, 50