In general, Christianity in its institutional form is without sexual techniques.  It is high on attrition and high on techniques that might be termed ascetic and deprivatory in approach.  Much is made of techniques which, frankly hurt, and hurting yourself  is the opposite of what Jesus might have wanted.

But, in some of the mystical branches of Christianity, we find techniques based on sex, a feature which the 'law and order' brigade of the Catholic church and the later Protestant and Puritanical fathers would have [and did] condemn as wicked, but which nevertheless were practised in a clandestine manner by a small minority.

One of the groups to practise these techniques were the Knights Templar.

The Knights Templar were in theory supposed to be ‘chaste’, but it is clear that their form of chastity might have been a bit special.  If you read the general description for the Knights Tempar you will see that when they were arrested by Philippe the Bel, they were charged with apostasy, idolatry, heresy, obscene rituals and homosexuality, financial corruption and fraud, and secrecy.

There is no smoke without fire, as my Mum used to say, and there are two charges which bear a little investigation -  'obscene rituals and homosexuality'.

Homosexuality, because of the influence of Paul, was regarded by the Catholic church as a dreadful crime, but the Templars would have been an ideal safe haven for a homosexual person.  A homosexual man would not have had to endure any form of false marriage and the enduring risk of being 'discovered'  as long as he joined the Templar movement. So the 'accusation' was probably true, there were quite likely to have been a number of homosexual men in the Templars.

Now let us turn to the 'obscene rituals'.

The Crusades produced some interesting effects in the lives of those who participated.  Within 50 years of the First Crusade, for example, the Latin translation school in Toledo had translated a huge number of Arabic works into Latin.  Furthermore once the Holy Land was settled by men from the Crusading countries, a form of 'going native' occurred .  As Fulcher of Chartres explains in the following quote, after only 18 years the land conquered the men

The Knights Templar - Howarth
consider and reflect how we, who were westerners, have become orientals; those who were Italian or French have become Galileans or Palestinians; those who lived in Reins or Chartres are now citizens of Tyre or Antioch.  We have forgotten our birthplaces .. some are married, perhaps to a Syrian, an Armenian or even a Saracen who has received the grace of baptism, with children and even grandchildren... One man cultivates his vines, another his fields; those who in their homelands are poor have been enriched by God.  Why should they return to the west when the east is so favourable.

Now enter the Knights Templar, who had no intention to settle in the land of the Crusades,  but who opened up the route from the East to the west, made it safe and thereby ensured the ideas would travel west at greater speed.  And what idea was likely to travel the fastest in clandestine ways?

The idea that sex could give you a spiritual experience.

In the 'Royston Cave', a Templar hiding place in the UK, a number of artefacts have been found that all point to the use of stimulation using sexual techniques and kundalini energy.

These are shown in the description with an explanatory text

Sheila-na-gig – a sexually explicit carving, rather fetchingly called a 'fertility symbol' by academics, but actually a symbol of spiritual experience gained by sexual techniques [shown left, another unrelated example is shown right] 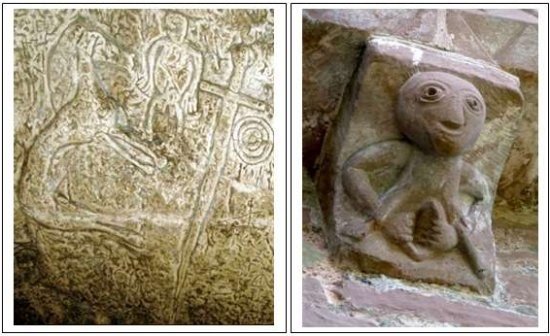 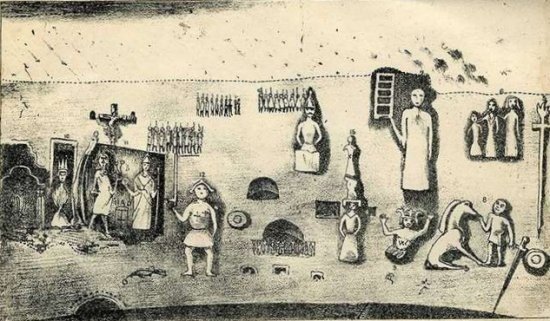 If you look closely you will see the following symbolic feaures

There are also references to  Ialdabaoth, Jao, Abrasax, Sabaoth, Adonaisos and Abraxas