There is more symbolism in the picture than just the handwashing, but this is absolutely key to its understanding.

The model is Alexa Wilding as opposed to Jane Morris.

I find it fascinating as it shows some of the ambivalent attitude Rosseti appeared to have towards women.  The unattainable and 'pure' in deed and word were worthy of 'worship' and raising on a pinnacle, but those he lusted after  - like Jane -  he often showed as temptresses.

He wanted them to say 'no', because it was by raising them to the divine he gained inspiration and 'ascent'.  One could call it hypocrisy, as most women just are and don't attempt to be anything, it is only men that weave fantasies round them,  but that's men for you.

I'd rather be a fantasy than chief cook, laundress and bottle washer anyday. 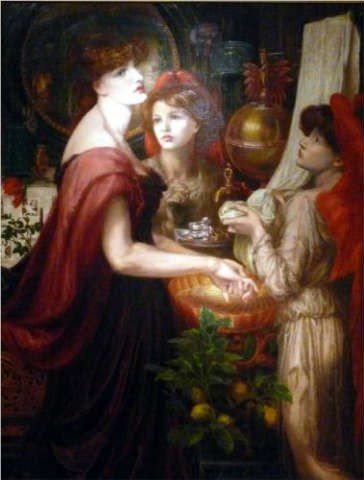