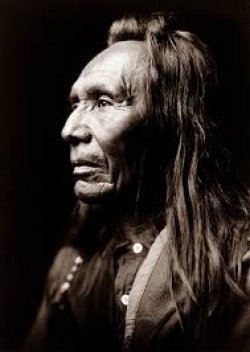 During that summer Roman Nose had made many medicine fasts to obtain special protection against enemies.  Like Red Cloud and Sitting Bull, he was determined to fight for his country and he was also determined to win.

White Bull, an old Cheyenne medicine man, advised him to go alone to a medicine lake nearby and live with the water spirits.

For four days Roman Nose lay on a raft in the lake without food or water, enduring the hot sun by day and thunderstorms at night.  He prayed to the Great Medicine Man and to the water spirits.

After Roman Nose returned to camp, White Bull made him a protective war bonnet filled with so many eagle feathers that when he was mounted, the war bonnet trailed almost to the ground

…. in the ensuing fight, Roman Nose lost his horse, but his protective medicine saved his life