Han Yu (768–824), born in Nanyang, Henan, China, was a precursor of Neo-Confucianism as well as an essayist and poet, during the Tang dynasty. He stood for strong central authority in politics and orthodoxy in cultural matters.

He was also considered to be among China's finest prose writers, second only to Sima Qian, and first among the "Eight Great Prose Masters of the Tang and Song" in a list compiled by Ming Dynasty scholar Mao Kun. Song Dynasty poet Su Shi praised Han Yu that he had written prose which "raised the standards after 8 dynasties of literary weaknesses".

A GIRL FROM SPLENDOR-BLOOM MOUNTAIN

it’s sin and blessing far and wide, enticing threats and lies,
and thick as duckweed adrift, crowds push and shove to hear.

Yellow-robed masters of Tao are out preaching truths too,
but crowds are sparse below their seats, sparse as dawn stars.

A girl from Splendor-Bloom Mountain, Taoist family, longed
to drive the foreign faith out, restore the divine immortals,

so she washed away her makeup, and donned cap and cloak.
Neck white and cheeks red, azure-black eyebrows O so long,

she came to ascend the high seat and expound true mysteries.
Temple gates are consecrated, but someone swung them open,

and someone, I can’t imagine who, quietly spread the news.
Suddenly things broke loose, crashing like a thunderstorm,

and the Buddhist temples were swept clean, footprints gone.
Regal horses and carriages come too, clogging the streets.

Soon the temple yard’s so crowded people have to sit outside,
and if you’re late, there's nowhere left: you miss the show.

People pull out hairpins, strip off bracelets and waist-jewels:
piles of jade and gold offered up, sparkling under azure skies,

and from the gates of heaven, luminaries bring a summons:
six palaces wish acquaintance with the master’s countenance.

The jade Emperor nods his approval. He permits her return,
and she rides a dragon-drawn crane into azure depths of sky.

Fine sons of those great families - what do they know of Tao?
They come a hundred deep, mill around, restless, imagining

Stairs to immortality hard, weighed down by flesh and blood,
they spare no expense, send tender regards via azure birds. 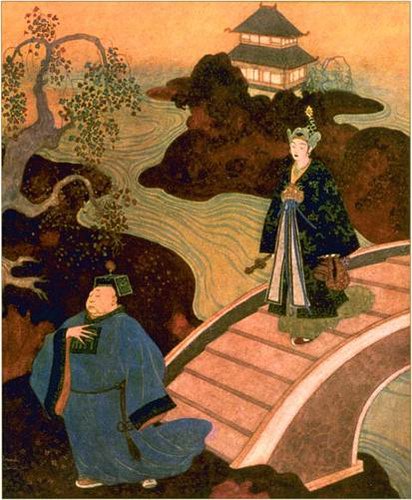