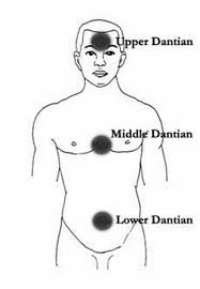 Dan Tien [also Dantian, as in diagram] is loosely translated as "elixir field", "sea of qi", or simply "energy center" within Traditional Chinese medicine as well as a number of systems of spiritual practises such as Qigong, Taoism and Buddhism.