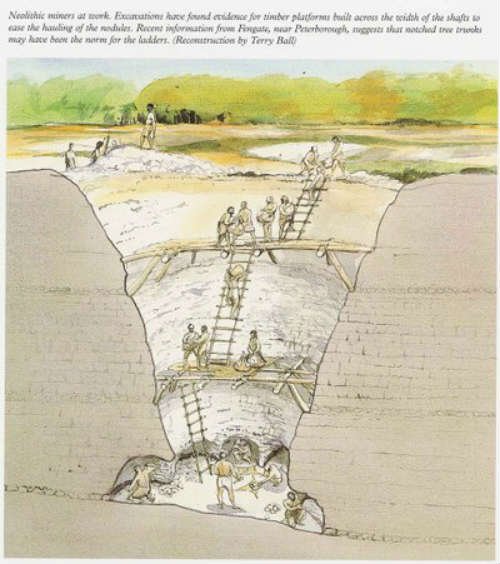 Vaults, barrows, mines and other man made ‘caves’ are just as good at provoking a spiritual experience as a natural cave.

Anyone today who manages to crawl to the end of a gallery at Grimes Graves in the UK - a Neolithic flint mine - will appreciate just how alien the environment suddenly becomes.  It is the Neolithic equivalent of a sensory deprivation tank.  There are no familiar noises, what sounds there are being muffled and distorted.  One cannot feel the sun, wind or rain on one’s face.  The colour is almost uniform.  There is often no real sense of day or night.  Even today, once in the deep galleries of Neolithic shafts, the sense of isolation and separation from the real world is immense.

A cave, barrow, mine or similar underground space works by providing deprivation of visual stimuli – total darkness or near darkness and usually very little sound.  It is not a more complete technique unless you manage to provide a way of eliminating smells [caves can smell musty] and touch sensations.  I suppose it may be possible to bring an air bed or lilo or some soft of comfortable bed with you down into the cave.

The environment provided by deep, inky dark caves is profoundly conducive to spiritual experience.  Not only do you have sensory deprivation, but you can add extra methods such as drumming and flickering flames or torches, lamps and fires.  You don’t need drugs in these circumstances, these are more than sufficient to give you quite a profound experience.

Imagine for a moment the scene in which the paleolithic hunter or gatherer - artist shamans - conducted his or her long ritual session in the cave.  He or she would sit or lie for long periods in total darkness and silence.  Perhaps once they had reached a certain state, their trance would be heightened by driving drum beats resonating so strongly within the caverns that the participants bodies actually reverberated with the deep rhythms.  Stalactites are ideally suited to producing very deep resonant sounds so there may have been no need to bring the drums in.  Then there would be the sudden eruption of flickering light from a burning torch or stone lamp. A combination of befuddling techniques extremely suited to helping the shaman both see and hear the bison, reindeer, rhinos and other creatures that they needed to find for the hunt.

The followers of Pythagoras retreated to pitch black caves to receive wisdom through their visions.

Neolithic man seems to have used caves to achieve spiritual experiences that he then recorded on the walls of the cave.

A number of caves were used by Australian Aborigines. Ellensbrooke Cave in Western Australia for example, is a cave of phenomenal length extending over a great distance to the sea.  Its use has resulted in a whole host of ‘legends’ about the beings there, and the things seen.

The Prophet Muhammad used to retreat to the cave on Mount Hira where he received his first revelation – but had been going there for many years prior to his meeting with the ‘angel Gabriel’. Similar examples include Moses' going into seclusion for 40 days in a cave in Mt. Sinai.

Miners trapped by accidents in mines frequently report hallucinations, visions and seeing ghosts when they are in the pitch dark for days. There are numerous folk tales of the miners who saw the dwarfs in caves.

I personally think this is a frightening way of achieving spiritual experience and could lead to some quite awful visions, particularly given the length of time you may need to stay there, but then I am a sensitive little soul and a real scaredy cat.

They have been used effectively for thousands of years, they do work, but this is a useless technique if you are claustrophobic.