The Native American  sweat lodges - also called purification houses, sweat houses, medicine lodges and medicine houses -  are buildings with the specific purpose of inducing spiritual experience via steam inhalation.
One of the early non-Indian uses of the technique can be found in the fifth century BC, when Scythians constructed pole and woollen cloth sweat baths.

Sweat lodges are not dissimilar to a form of ceremonial sauna. Rocks are placed in a fire or oven outside the building and then heated until glowing. The stones used are often volcanic  because volcanic stones do not explode from the temperature or when water is placed on them.  The red hot rocks are placed in a pit located in the centre or near a wall.

The building  is usually small and windowless.   The door of the building is shut and the participants sit round in almost total darkness and silence – thus ensuring a form of sensory deprivation.  The heat is often fairly intense, however, the intention is to ensure the participants are not aware of being either hot or cold.  They are usually naked.   In modern sweat lodges where westerners are included, the participants may wear a loose form of cotton smock or overshirt without sleeves for modesty only.
Water is then poured over the rocks and steam is then given off.  Eventually the room is filled with steam and the participants in silence breathe in the steam and eventually reach an in between state between sleeping and being awake – the state at which visions can occur.  Great care needs to be taken by the person administering the water to create steam that the resulting steam does not scald people.

Occasionally instead of silence drumming is used or chanting.  In all properly conducted ceremonies, one or more persons will remain outside the sweat lodge to assist the participants. 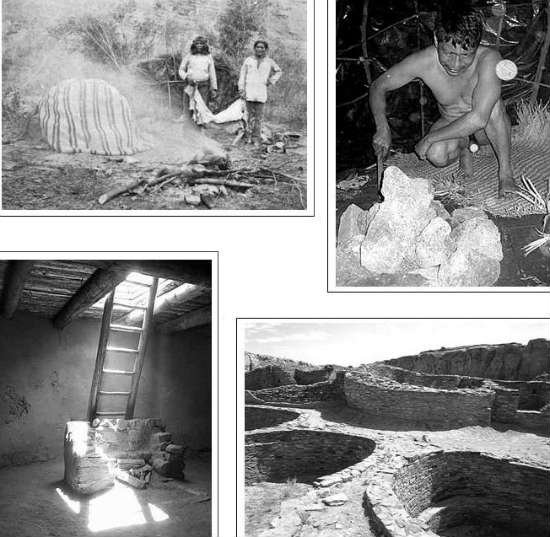 The ‘kivas’ used by modern Puebloans for religious rituals, including the Hopi and most other Pueblo peoples, have a similar purpose, although they may use smoke inhalation more than steam inhalation.  Kivas are square-walled or round and underground, with only one entrance and exit point in the roof.
Mexican & Central American Native Sweatlodges are called Temazcal.  The sweatlodge in Mesoamerica is usually a domed permanent structure and constructed from volcanic rock and cement.