Shiatsu is a form of healing therapy founded by Tokujiro Namikoshi.  There are no ‘religious’ aspects to the method.

Shiatsu [shi = finger, atsu = pressure] is principally a method for treating illness using compression of parts of the body.  The trigger points in shiatsu are called tsubos and there are about 660 tsubos used in shiatsu for healing work.  If we use the hand as an example, there are a great many trigger points on the hand. 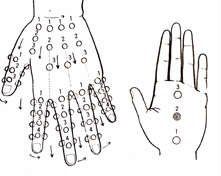 Quite a large number also occur on the legs and feet.

In the diagram below I have shown the approximate position of the tsubos in relation to various organs in the body.  The diagrams come from the books of Tokujiro Namikoshi.

In contrast, Zen Shiatsu uses both meridians and trigger points - tsubo points.  The number of meridians and points, however, is slightly larger than in Traditional Chinese Medicine, principally because Shizuto Masunaga found extra ones during the treatments he gave to people.  The definition and theory, however,  is exactly the same

The condition of energy or Ki, in the meridians and trigger points - tsubo points  - is classified into two concepts Kyo and Jitsu

Both cause illness and indicate some form of pathological problem if they are present.

This concept of kyo and jitsu is known in classical Chinese medical books as jya-ki or the condition of energy distortion.

The technique used to normalise jitsu points is called sedation.

The technique used to normalise kyo points is called tonification

Sedation is easier than tonification.  In sedation, the jitsu areas are stimulated with, for example, a thumb or finger held perpendicular to the tsubo point for a short time with a gentle but firm touch.  It is easier to find the jitsu areas and sedate them than it is to find the kyo areas.  If the person is already relatively healthy, jitsu areas can be normalised with simple sedation without much difficulty.

In tonification, however, very often the flat of the hand or a number of fingers are used and gently pressed on the point for some time.  The chronic kyo patient has more difficulty normalising his energy because his body’s healing power has been depleted.  If you don’t do the sedation of a jitsu point correctly, not too much can go wrong, but if you get the tonification of a kyo point wrong, you run the risk of depleting the patient’s energy even further, so kyo problems are more tricky and require more skill than jitsu points.

It is possible that sedation and tonification are achieved by the practitioner using one hand where the points are close together,  the thumb being used to sedate and four extended fingers being used to tonify.

The healing  is also said to affect the practitioner, as energy can end up being ‘transferred’ from the practitioner to the person and occasionally vice versa.  A very intense shiatsu session can have quite an effect on the shiatsu practitioner leaving him or her quite drained.

In Zen Shiatsu, each point is treated in turn and a diagnosis made and the point treated until it is normalised.  As such the total body shiatsu stage is a full diagnostic and treatment session.

It can last anything from an hour upwards, depending on the experience of the practitioner [less experienced practitioners require longer to diagnose and find the points] and the degree of problems found. 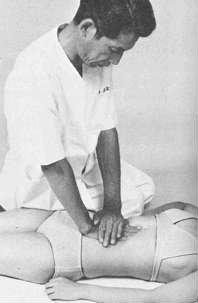