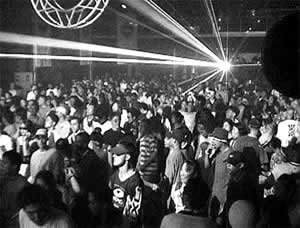 Rave dancing is essentially frenetic exercise, and frenetic exercise undertaken for some time can give you a spiritual experience.  When I say dancing, however, I mean you really really have to dance  -  really dance, frenetically, madly, not just waltz around the room in your ballet slippers.  Rave dancing is totally frenetic.  It also combines a number of other techniques.

It has the advantage that this combination is a form of sensory overload.

Up then noble soul!  Put on thy jumping shoes [sic] ….. and overleap the worship of thy mental powers, overleap thine understanding and spring into the heart of God and into his hiddenness where thou art hidden from all creatures.

This is the official description – it is very funny…

“Rave dancing  is usually performed at ‘raves’ a term, in use since the 1980s, to describe dance parties (often all-night events) where a number of additional mechanisms are used to induce a state of trance, notably:

Drugs were also once a major part of the rave scene but there is a growing movement amongst the attendees to exclude the drugs as being unnecessary.”

Rave dancing is characterised by extremely physical fast movement of the whole body – and it is this that makes it so similar in its effects to ‘extreme exercise’ if undertaken for a long enough period and at a frenetic enough pace.  One thing which characterises rave dancing is that there are no set moves.  People simply dance as they feel inspired to dance by the music, so they have absolutely no need to concentrate on steps or remembering dance moves, they can just lose their memory and ‘lose their mind’.

The effect of some trance music has been likened to the trance-inducing music created by ancient shamanists during long periods of drumming.

The most effective dancing would be a period of continuous aerobic ‘dancing’ in which glucose is burned followed by a very intense period of anaerobic ‘dancing’ when after this long continuous prolonged period of physical movement, you exercise when the body is low on glucose and you are not getting enough oxygen – you have gone beyond your VO2 max.  It is at this stage [or not long after] that you will get the ‘high’.

In one newspaper report a few years ago, the reporter described the effect of a rave on a 70 year-old Zen monk who was taken to a rave party.

“ 'This is meditation!', he shouted above the noise. Later he explained that the walking meditation he taught involved being fully aware 'in the moment' without any internal dialogue separating actions from intentions, and that the same definition applied to the dancers all around him”.

So we can see a common thread running now through all these techniques.