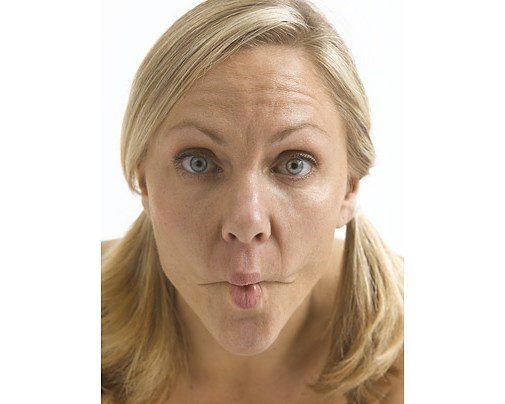 Kaki mudra also known as Crow’s beak or Pursed lip breathing is a form of controlled breathing.  It is used by doctors and health therapists which is where the name  Pursed lip breathing comes from, and is commonly used for people with ‘advanced COPD’  - chronic obstructive pulmonary disease  - who have a tendency to hyper-inflate their lungs during attacks of bronchospasm, panic or exercise.  It is also used to help people who suffer from panic attacks, and patients undergoing respiratory rehabilitation or muscle training.

It is also a principle breathing exercise in yoga, one of the major exercises used to train people to control their breath.

In yoga, this practise is classified as a ‘mudra’.  The word kaki means 'crow' and the practice is so called because, during inhalation, the mouth is shaped like a crow's beak. In yoga books in English it is usually called 'the crow's beak'.

Note that this technique is not the same as the furled tongue technique, [shown right] which has a different name and is a different yoga exercise.  The effect is somewhat similar, but not everyone can furl their tongue, so the crow’s beak is more widely attainable.

During inhalation the lips should be shaped as shown in the picture above – well almost!  She’s gone a bit overboard on the pulled in cheeks. The two lips should be pursed together leaving an air tube through which the air may be inhaled.

The tongue should be relaxed.

Breathe in slowly and deeply through the mouth.

At the end of inhalation close the lips.

Exhale through the nose.

Both acts limit the air flow.