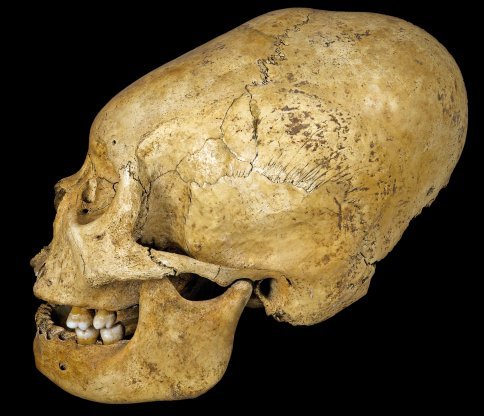 Artificial cranial deformation, head flattening, or head binding is a form of body alteration in which the skull of a human being is intentionally deformed.

It is done by distorting the normal growth of a child's skull by applying force. Flat shapes, elongated ones (produced by binding between two pieces of wood), rounded ones (binding in cloth) and conical ones are among those chosen. It is typically carried out on an infant, as the skull is most pliable at this time. In a typical case, headbinding begins approximately a month after birth and continues for about six months.

If you look at all the learned academic discussion of this practice the explanations for it are as follows:

“Cranial deformation was probably performed to signify group affiliation, or to demonstrate social status. It could be aimed at creating a skull shape which is aesthetically more pleasing or associated with desirable attributes. For example, in the Nahai-speaking area of Tomman Island and the south south-western Malakulan (Australasia), a person with an elongated head is thought to be more intelligent and of higher status".

But why are they of higher status you should be asking, and the reason is they are “closer to the world of the spirits”.

Intentional head moulding producing extreme cranial deformations was once commonly practised in a number of cultures widely separated geographically and chronologically, which rather interestingly shows that brain damage as a means of experience was once widely recognised. Just as we have epileptics widely revered, so we also have the brain damaged revered.

It still occurs today in a few places, like Vanuatu.

Early examples of intentional human cranial deformation predate written history and date back to 45,000 BC in Neanderthal skulls, and to the Proto-Neolithic Homo sapiens component (12th millennium BC) from Shanidar Cave in Iraq. It occurred among Neolithic peoples in SW Asia.

The earliest written record of cranial deformation dates to 400 BC in Hippocrates' description of the Macrocephali or Long-heads, who were named for their practice of cranial modification.

In the Old World, Huns and Alans are also known to have practised similar cranial deformation. In Late Antiquity (AD 300-600), the East Germanic tribes who were ruled by the Huns, adopted this custom (Gepids, Ostrogoths, Heruli, Rugii and Burgundians). In western Germanic tribes, artificial skull deformations have rarely been found.

In the Americas the Maya, Inca, and certain tribes of North American natives performed the custom. Trepanning was a complementary practice probably based on the idea of access via the crown chakra to the Higher spirit.

In North America the practice was especially known among the Chinookan tribes of the Northwest and the Choctaw of the Southeast. The Native American group known as the Flathead did not in fact practise head flattening, but were named as such in contrast to other Salishan people who used skull modification to make the head appear rounder. However, other tribes, including the Choctaw, Chehalis, and Nooksack Indians, did practise head flattening by strapping the infant's head to a cradleboard. The Lucayan people of the Bahamas practiced it.The practice was also known among the Australian Aborigines.

The nobility of the Paracas culture practised skull binding, resulting in cranial deformation. The Paracas situation is somewhat unique in that researchers have found the presence of at least 5 distinct shapes of elongated skulls, each being predominant in specific cemeteries. The largest and most striking are from a site called Chongos, near the town of Pisco, north of Paracas. These skulls are called "cone heads" by many who see them, because of their literal conical appearance. 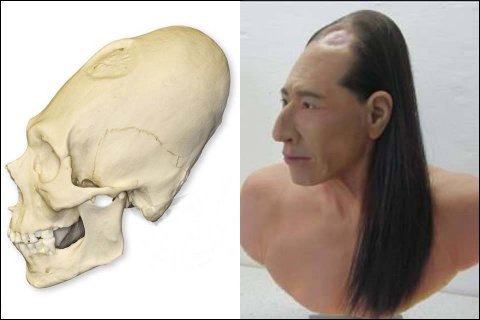 Friedrich Ratzel in The History of Mankind reported in 1896 that deformation of the skull, both by flattening it behind and elongating it towards the vertex, was found in isolated instances in Tahiti, Samoa, Hawaii, and the Paumotu group and occurring most frequently on Mallicollo in the New Hebrides (today Malakula, Vanuatu), where the skull was squeezed extraordinarily flat.

In effect, every shamanic culture and mystic group from the Kahuna to the South American shamans practised it.

What is perhaps key is that they appeared to know which deformity produced which effects. If you look at the section on brain damage you will see that depending on the organ damaged various capabilities may exhibit themselves. To use the analogy the configuration of the hardware determines the ultimate capabilities of the computer.