Wheel with 5 spokes [I Ching]

The wheel with 5 spokes takes on the overall symbolism of a wheel as being a cycle of change or evolution.  The simplest and possibly the oldest cycle is that in the I Ching – which is the book of changes.  Here the cycle is confined to only a few steps that apply to any activity that may occur and to anything from a nation to a person, a business, a culture, a project, a species, - any entity.  The cycle consists of 5 stages

Thus the cycle is extremely generic and not confined to any form of creation or destruction of one thing, but creation and destruction in its most general form.  What makes the I Ching somewhat special is that it shows how one stage can lead to another, what follows next as it were and is thus a useful guide to someone in a certain situation as to what to look out for.

The symbolism used here is the Chinese elements.

The wheel has no hub because this is a generic model showing sequence. 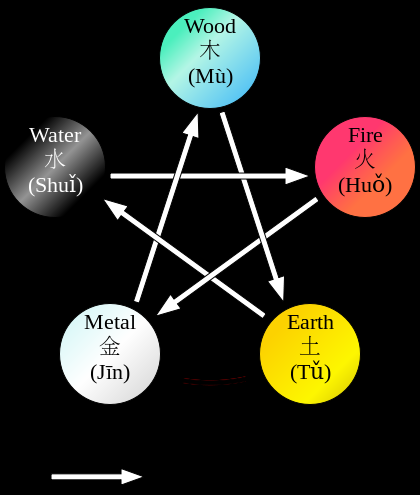