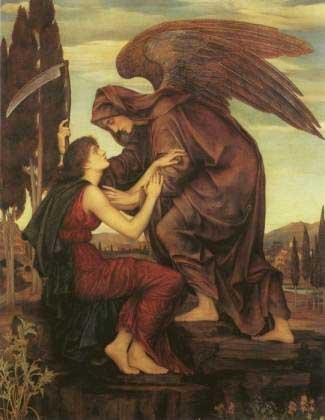 According to Greek mythology Death is a system not an event.  In other words, Death is preprogrammed in each of us and the creatures on earth, and events then unfold to ensure death occurs as it is programmed to.

Thánatos was the personification of the system of death in Greek thought.   The Ceres were female death spirits, various aspects or types of death.

The process of death was thought of only in functional terms, not physical as such the functions of death are actually invisible to us.

Hesiod managed to create a suitably vivid picture of the personification

And there the children of dark Night have their dwellings, Sleep and Death, awful gods. The glowing Sun never looks upon them with his beams, neither as he goes up into heaven, nor as he comes down from heaven. And the former of them roams peacefully over the earth and the sea's broad back and is kindly to men; but the other has a heart of iron, and his spirit within him is pitiless as bronze: whomsoever of men he has once seized he holds fast: and he is hateful even to the deathless gods