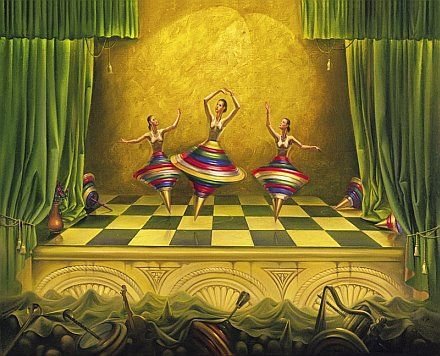 During a spiritual experience it is not unknown for the person to feel as though he or she has entered a whirlwind or a whirlpool.

During the experience the person can feel just as though they are being spun round and round like a little top.  The child's spinning top - in theory just a toy - is yet another invention by those who wanted to keep the old truths alive as a reminder that this was one of the features of spiritual experience.

There is in some cases an added connection with the cone of energy and the levels and layers as well as the ascent on the spiritual path, however, the speed with which the top often spins means, the first symbolic meaning tends to take precedence.

A whirlwind or whirlpool is essentially a tunnel symbolically.  Generally speaking however it is very specifically related to chakras.

Our spiritual body, along with numerous other energy bodies, has a large number of chakras,  which are the receivers and also it appears the emitters of energy.  The chakras seen in many hallucinations [hallucinations because the image is superimposed on the physical body]  are whirlpool or whirlwind like spinning whirling energy.

When we go out of body it is usually through these chakras and as a consequence we appear to be going through a whirlpool  or whirlwind or other similarly moving energy vortex.  As you can see from the diagram above we can go ‘down’ figuratively speaking and ‘up’.