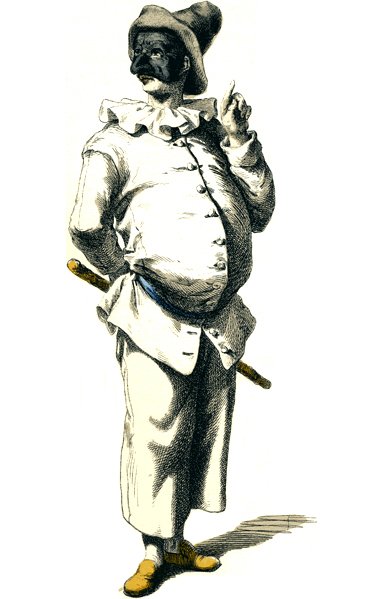 Pulcinella, or Punchinello in English, is a classical character that originated in the commedia dell'arte of the 17th century and became a stock character in Neapolitan puppetry.  He is an alchemical character, with links to the clown.

Many regional variants of Pulcinella were developed as the character diffused across Europe. In Germany, Pulcinella came to be known as Kasper. In the Netherlands he is known as Jan Klaassen. In Denmark he is Mester Jakel.

In Romania, he is Vasilache; in Hungary he is Vitéz László, and in France Polichinelle, while in the United Kingdom he inspired the character of Mister Punch of Punch and Judy.

The name derives from the Italian pulcino meaning chick and the original character had a long beak-like nose, in essence he was an immature cock.  [So we are already starting to get clues about the real meaning of Punch and Judy].

He was dressed in white with a black mask.  So we have the double symbolism of the mask and the use of Black and White.

Punchinello used to stand out, even then, for his peculiar voice, “whose sharp and vibrant qualities produced with a tool called a swazzle contribute to the intense tempo of the show”.  Punch still has that voice even now.

Punchinello, and as a consequence Punch and Judy, is about the sexual methods of obtaining spiritual experience.

Punchinello is on the spiritual path, more white than black – so he had conquered the Conscious Black part of the mind and had managed to invoke the White subconscious mind.

In order to effectively use sexual methods, the energy that would normally be expended during orgasm and emission has to be diverted and it is both literally and figuratively ‘stored’ – this is shown in the figure who usually has a very exaggerated stomach.  The energy is usually used for a controlled kundalini experience, but it can simply be used as a means of provoking spiritual experiences and ‘opening the door’.  In eastern systems such as that used by Qigong or Ninpo, this reservoir of energy is known as the DanTien.

The voice is intended to depict in a joking fashion the effect – a sort of strangulated high pitched sound – the voice of the eunuch.

As we can see this was once no entertainment for children it had a very serious intent – to preserve the methods in a time of very severe repression of all things sexual by the church.

In various European languages, including at least Italian, French, Spanish, Polish, and Portuguese [catholic countries]  a "Pulcinella's secret" or a "Polichinelo's secret" is an "open secret."

It appears that in Protestant countries it is not an open secret – but then they were ‘Puritans’.