Pegasus was one of the most famous winged horses.  It thus takes on the symbolism of the horse and wings.  In effect, it is able to travel up the Levels and Layers into the Air level and beyond.

In Greek mythology, Pegasus (Greek: Πήγασος Pégasos, 'strong') was sired by Poseidon, in his role as horse-god, and foaled by the Gorgon Medusa. He was the brother of Chrysaor, born at a single birthing.

Pegasus aided the hero Bellerophon in his fight against both the Chimera and the Amazons. Bellerophon killed the Chimera on Pegasus' back, and then tried to ride the winged horse to the top of Mount Olympus to see the gods. However, Zeus sent down a gadfly to sting Pegasus and cause Bellerophon to fall. 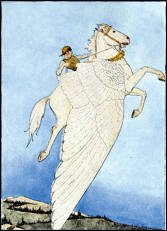 Alfred Lord Tennyson – from The Vision of Sin
I had a vision when the night was late
A youth came riding towards a palace gate
He rode a horse with wings, that would have flown
But that his heavy rider kept him down