Pantomime is superficially a type of musical comedy stage production, designed for family entertainment. It is generally performed during the Christmas and New Year season and can be found in the United Kingdom, Australia, New Zealand, Canada, Zimbabwe, Jamaica, South Africa, India, Ireland, Gibraltar, and Malta [all originally part or allied to the British Empire]. It is great fun and children love them.

But Pantomime, just like the Circus, and Theatre, once had an important role as a means of preserving old truths in an age of persection by the established religions. As such traditional Pantomime, based as it is on Nursery rhymes, Myths and Fables and supposed children's stories contains a great deal that baffles non English people but in some people jogs a small memory and in those who know the symbolism brings a warm smile to their faces.

The word "pantomime" comes from the Greek word παντόμιμος (pantomimos), consisting of παντο- (panto-) meaning "all", and μῖμος (mimos) meaning "imitator" . So in its original form Pantomime was imitating something else. A "pantomime" in Ancient Greece was accompanied by sung narrative and instrumental music, often played on the flute.

In effect, just like the kabuki actors in Shinto they re-enacted spiritual travel – out of body adventures and fights with demons. If Beowulf, for example, had been re-enacted with people attempting to show what his out of body adventures were like, they would have been pursuing Pantomime. It may even have been part of the education of Initiates to the Mysteries, as some Pantomimes involved quite a bit of sex.

Variations of Pantomime existed in many other European countries. Pantomime can be found in the 16th-century commedia dell'arte tradition of Italy. The meaning of comedy here is the same as that used in Dante's Divine Comedy, which makes this an extremely spiritual pursuit.

"The word "comedy," in the classical sense, refers to works which reflect belief in an ordered universe, in which events not only tended towards a happy or "amusing" ending, but an ending influenced by a Providential will that orders all things to an ultimate good – the Great Work. By this meaning of the word, the progression of the pilgrim from Hell to Paradise is an expression of ‘comedy’, since the work begins with the pilgrim's moral confusion and ends with the vision of ‘God’."

In the Middle Ages, the Mummers Play was the equivalent of this early form of Pantomime. It was a traditional British folk play performed during the festive gatherings of both urban and rural communities and contained many of the archetypal elements of the contemporary pantomime such as stage fights, 'coarse humour', fantastic creatures and gender role reversal.

Religions' hold on society in the 1500s and 1600s, resulted in the need for an almost totally visual form of Pantomime. Spoken drama was only allowed in London in certain "patent theatres" until Parliament changed this restriction in 1843. But there were many who wanted the tradition and its messages to remain alive. An 18th-century author wrote of David Garrick: "He formed a kind of harlequinade, very different from that which is seen at the Opéra-Comique in Paris, where harlequin and all the characters speak."

By the early 1800s, the pantomime was based on stories adapted from European fairy tales, classic English literature or nursery rhymes.

More details about why Pantomime was needed can be found in the section Kings and Queens and politics.

The Elements and their Symbolism:

So called cross dressing – there is a 'principle boy', who is a girl, and often a Pantomime Dame [equivalent to a Duchess symbolically] who is a man but dresses as a woman. The principle girl is usually a girl, but the overall symbolism being employed is Androgyny.

Comedy – There are two kinds of comedy.

Magic – there is a great deal of magic in Pantomime, not only in the stories themselves but in the use of props, trapdoors, puffs of smoke, wands, and a number of other things related to Magicians

Song and dance – In modern Pantomimes, the use of traditional songs and music has very sadly been lost, but in my day the songs were very carefully worded and the tunes traditional. Children in the audience were even invited on stage to sing along with members of the cast, a good way to teach the next generation.

Rhyme and poetry – most of the script is in poetry which at one time would have made the messages more memorable when they needed to be.

Audience participation – things are remembered far better if you are involved. Pantomime is a very well developed form of participatory theatre, in which the audience is expected to sing along with certain parts of the music and shout out phrases to the performers. Calls such as "He's behind you!" , and "Oh, yes it is!" and "Oh, no it isn't!" [Contrast] are so well known they always work to produce a response. The audience is always encouraged to hiss the villain and "awwwww" the poor victims. Incidentally the villain is rarely really villainous or frightening and the goodies are not always that good.  LISTEN

Fantastic means of transport – we have the Pantomime horse which bears much similarity to the hobby horse, for example, and we also have chariots, magic carpets and other symbolic objects. There is always at least one animal, played by an actor in "animal skin" or animal costume, the pantomime horse or cow, is played by two actors in a single costume, one as the head and front legs, the other as the body and back legs.  There are also often birds - for example Mother Goose

Fool, the – a Fool character used to be incorporated in early Pantomimes, although the name of this role regularly changed. John Rich introduced Harlequin into the theatres' pantomimes under the name of "Lun" (for "lunatic") in the 1700s.

Acrobatics and flying – all re-enactment of out of body flight or visions and borrowed from Circus. The harlequinade 'chase' scene, for example, was fast paced and included spectacular scenic magic as well as acrobatics.  When I was a child there was also Trapeze.

The Lovers – all the plots of the plays involve the Lovers. And the variations were and are all based on the thwarting of the Lovers ever uniting.

Spiritual landscapes – involving palaces, castles, fountains, wells and secret tunnels [trapdoors in the stage]. There was much use of portals and many acrobatic leaps through windows, from ladders, up chimneys and so on. There was nearly always one scene involving a gloomy forest or a magic cave.

Fairy Queen or Fairy Godmother character – the spirit helper. The good fairy enters from stage right (from the audience's point of view this is on the left) and the villain enters from stage left (right from the point of view of the audience). This convention goes back to the medieval Mystery plays, and matches exactly the idea of the Left/Right split – Right is bad, Left is good.

Symbolic stories – despite being a Christmas entertainment, Pantomime story lines and scripts usually make no direct reference to Christmas, and are almost always based on 'traditional children's stories'. Classic pantomime stories include Cinderella, Aladdin, Dick Whittington and His Cat and Jack and the Beanstalk, Sleeping Beauty and occasionally Peter Pan, and Snow White and the Seven Dwarfs – all of which have considerable symbolic meaning.

Slapstick - A slapstick comedy routine is always performed in authentic Pantomime involving a great deal of flour, paint, water and threats to the audience with swinging buckets containing nothing but confetti. This usually takes up an entire scene and for children is one of the best bits of all. The symbolism [if there is any] eludes me 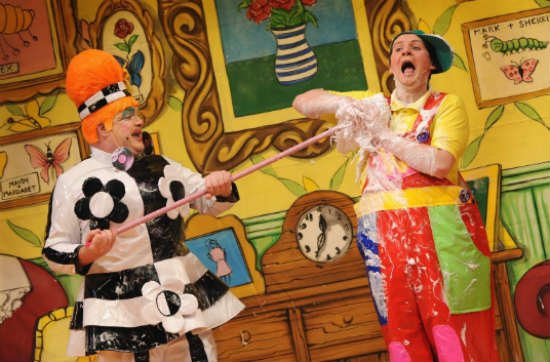 A wonderful interview with a real pantomime dame