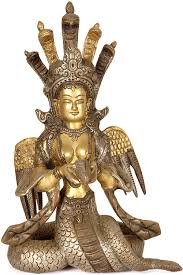 In the Indian Hindu cosmology, Nāga (nāgá, Burmese pronunciation: [naːɡá]) is the Sanskrit and Pāli word for a class of entity or being, taking the form of a really large serpent – usually a sea serpent in that it is shown near or in water.

The symbolism is used in Hinduism, Buddhism, and Jainism.  [A female Nāga is a nāgī or nāgiṇī].

The Naga has two complementary meanings.

It is the same as the Ouroboros in that the Naga is a symbol of energy recycling, but in some cases it has added symbolism.

The kundalini experience is life transforming and affects your functions with both destruction of old functions and creation of new functions.  The experience creates a continuous cyclical energy flow, energy continually being received via the crown chakra and returned.

The Sea serpent or Naga can thus be a symbol of the experience having happened with the resulting energy recycling that takes place.

In some cases the serpent is shown as a king cobra, the symbolism here being consistent as the Cobra is a symbol of enlightenment too.

The Ancient Egyptian and African connection

"Naga (IAST: nāga; Devanāgarī: नाग) or Nagi (f. of nāga; IAST: nāgī; Devanāgarī: नागी) is a Sanskrit word, and the word describes a semi-divine race of people.  Thus we can define a Naga as a divine being who obtained his or her divinity using kundalini energy.

Of equal importance is the use of an almost identical term with identical meaning in East Africa, notably Ethiopia.  The ancient title of Het Heru, Nhst (Nhosot), vocalized as Nkoso in Akan is the origin of the term Nagast and Nagas (Negusit and Negus) – an Ethiopian title descriptive of royalty as in to reign. This term was also used for Khanitu (Nubians/Ethiopians) by the Kamau in general:  a royal race of people.  Ethiopians were the same race as the Ancient Egyptians, and the Ancient Egyptians we see in the pyramids were black – Africans – who were driven south by the invading Arab races.

The Nehesu are vocalized as the Negesu or Nagasu in Geez. Those who are first, foremost, from the land of the Ancestresses and Ancestors (first land, etc.). The Negus and Negusit (Nagas and Nagasit) are the Nehes and Nehesit – the first, head, leader, governor, governess, etc.

Thus we have two sets of people using the same words to describe their ancestors – a group of Divine beings who obtained their divinity by the use of kundalini energy.

The terms and myths thus belong to the Shaivites from the Indus valley and the Ethiopians/Ancient Egyptians.  ‘Nubia’ is derived from the term ‘nub’ in Kamit meaning ‘gold’ and thus the Nubitu or Nubians are the ‘golden’ people, adorned people, those worthy of praise, etc.’

Were they all in the end Dravidians who came from the mythical [or maybe not so mythical] Lemuria or Atlantis?  Possibly, but here however is another option

some of the Afurakanu/Afuraitkaitnut of ancient Khanit (Nubia) migrated east and settled India over ten thousand years ago. This is why the term Naga (also written Naya, Naka) is a name of the Divine Cobra in different parts of pre-aryan (pre-white) India. ………..During the invasions of India approximately 4,000 years ago the invaders came into contact with the indigenous Afurakanu/Afuraitkaitnut – the descendants of the Afurakani/Afuraitkaitnit migrants from Khanit. The … religions of hinduism and buddhism would later incorporate and corrupt the meaning and function of the Naga. The Naga in Black India, Naga in Khanit (Nubia) is the same Nanka in Akan. They all derive from Ra Aakha and Rat Aakhat or Ra Aakhu and Rait Aakhut.

Ra Aakhu or Ra Aakh is the fiery Circular Serpent Da Aakh, Na aakh, is found in the ancient temple of Naga in Khanit (Sudan, Nubia).