Any musician, but particularly one with a violin is a symbol of ‘death’ and particularly a fascination with death.  Death can mean normal death, but it can also mean the death of the ego, or the personality thus enabling the Higher spirit to take-over.

It thus represents both a fascination with and a terror of annihilation – the annihilation of the will and the take over by the Higher spirit that occurs at the last stage of the spiritual path. [see types of spiritual experience].

The symbolism is taken from the idea of the musician being the ‘magician’ capable of ‘transporting’ people with their music.  There is further symbolism associated with the fact that music itself has a correspondence with the levels and layers. Low notes take you symbolically [and actually it would seem] ‘down’ into the depths of your subconscious.  Higher notes can take you ‘up’ so that you wing or climb your way up the levels and layers to the aether level.  The violin being an instrument with very high notes is thus symbolic of higher levels of spiritual progress. 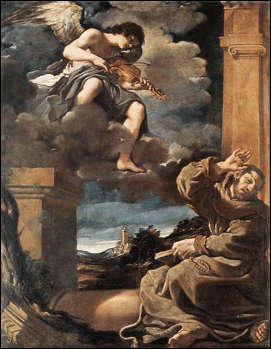 Guercino - St Francis with an Angel

All musical instruments can symbolically, and in the right context,  represent the human body.  Pipes are penises, most stringed instruments are the female body, thus musicians by extension are people who use all the different sexually based methods - sex magick, sexual stimulation and so on, to achieve spiritual experience.

Thus if we summarise.

A musician is essentially a person able to induce the spiritual experience of annihilation using sexually based methods and activities.