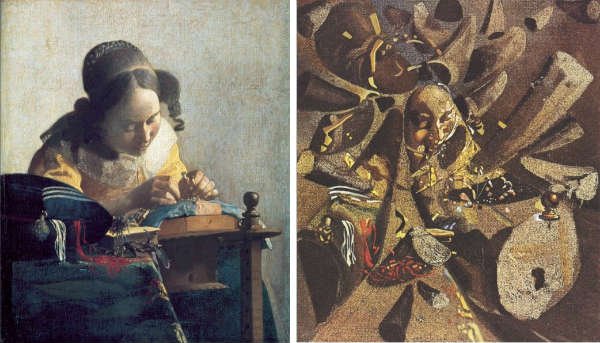 The concept of the ‘bond’ that binds form to function, or perhaps I should say function to form is also symbolically represented in poems, myths and so on as ‘laces’ or ‘ties’ or even ‘nooses’.  The concept is derived from the general idea that many early mystics did not like being tied to form.  As life 2000 plus years ago could be pretty hard, many were more interested in releasing the ‘bonds that bound them’ to become spirit without all the pain, hunger, fear and so on that seemed to accompany being form.

The symbolism is also closely relate to that of shoes.

Note that to make any sense of the following you need to realise that to any mystic the fact they were born is to them 'death' - they have been taken from a world without pain, fear, anger, greed, malice, the need to struggle and a world in which they were showered with divine love - in effect the spiritual world [which often seems more real to a mystic than the physical world] and have been forced to go down the tunnel [the well] into the underworld of physical existence.  Hell is on earth.  Thus death is birth.

Mircea Eliade – Shamanism Archaic techniques of ecstasy
To be noted too are the shamanic motifs that still survive in figures as complex as Varuna, Yama and Nirrti.  Each of these gods is, on his own plane, a ‘binding’ god.  Many hymns mention ‘the laces of Varuna’.  The bonds of Yama are usually called the ‘bonds of death’.  Nirrti, for her part, chains those whom she would destroy and the gods are implored to keep away ‘the bonds of Nirrti’.  For sicknesses are ‘laces’ and death is only the supreme bond.  We have elsewhere studied the extremely complex symbolism that forms the background for the magic of ‘bonds’.  Suffice it to say here that some aspects of this magic are shamanic.  If it is true that ‘bonds’ and ‘knots’ figure among the most characteristic attributes of gods of death, and not only in India and Iran but elsewhere as well (China Oceania etc), the shamans likewise possessed laces and nooses to serve the same purpose – capturing vagabond souls that have left their bodies.