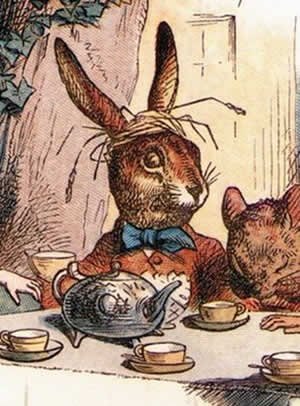 The March Hare from Alice in Wonderland

Shy,  generally fairly solitary, the hare is a symbol of co-creation, but unlike the rabbit - who is often regarded as immoral particularly sexually immoral [breaking moral codes], the hare is in contrast amoral – with  no moral codes.   Furthermore he/she is , again according to Cirlot known for ‘diligence of service’.

A Dictionary of Symbols – J E Cirlot
In general, the hare is a symbol of procreation; it is ambivalent in that it may be considered as naturally amoral or moral.
….For Rabanus Maurus, it symbolised lasciviousness and fecundity.  However, it had also become, by Gothic times, an allegorical figure of fleetness and of diligent service, for it is to be found in many Gothic sepulchres as an emblem in this particular sense – a sense subsidiary to that outlined above. 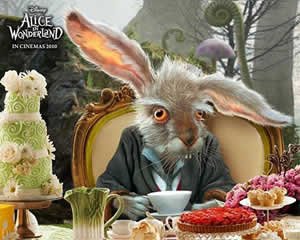 When the symbolism is applied to a person, that  person may be just slightly on the eccentric side, a little ‘loopy’ and somewhat unconventional in their behaviour.  They can also be unpredictable – one moment they are sane, the next – as ‘mad as march hares’.

Their dress may be slightly rumpled and odd, their hair not brushed and slightly tousled, their eyes have a far away look as if they are elsewhere.  Eccentricity visibly displayed.  They may often appear to be mad professors with ‘hare brained’ schemes.
‘Two penneth short of a shilling’……..

The madness of a march hare is actually factually incorrect, march hares are not actually mad!

Wikipedia
Normally a shy animal, the European brown hare changes its behaviour in spring, when hares can be seen in broad daylight chasing one another around meadows.  This appears to be competition between males to attain dominance (and hence more access to breeding females).
During this spring frenzy, hares can be seen "boxing"; one hare striking another with its paws (probably the origin of the term "mad as a March hare"). For a long time it had been thought that this was inter-male competition, but closer observation has revealed that it is usually a female hitting a male to prevent copulation

The animal on which their character is based – the hares or jackrabbit belongs to the genus Lepus. They can run extraordinarily fast in both straight lines but also zig-zag movements changing direction with extraordinary agility.  They can outsmart and outrun the vast majority of dogs and foxes.   The European brown hare (Lepus europaeus), for example,  can run at speeds of up to 72 km/h (45 mph). Hare people don’t run they think.  And they think extremely fast with changes in direction of subject matter and ideas at speeds that leave the normal thinker perplexed confused and left behind.  The mad professor again.

'Hare' people are not interested in money or material possessions.  They will spend hours on eccentric, only  just viable inventions.  They will be unaware of time, not be able to keep appointments unless managed and reminded  by those who care for them.  And people are needed to care for hare people because on their own,  they would live off weetabix and honey, never clean, never shave or bath and live in chaos, forgetting to pay their bills or buy essentials.

Hare people are not, on the whole, a particularly attractive proposition to a partner.  Unkempt, faraway, difficult to talk to, not very ‘sexy’ or sensuous, they appeal to someone who just likes looking after them, who is looking for  someone who will be faithful [never even think of chasing after someone else], someone who is grateful for being looked after and someone who has an odd air of innocence and gullibility about them.  Many hare people are men and hare people are very appealing to the woman who likes to ‘mother’ men.

Hare people do not go to dinner parties, or socialise or make small talk or join golf clubs.  Their shyness tends to work against this, but they are also happier inventing and thinking.  They find the social chit chat of ordinary people tiresome and boring.  This does not mean they are unkind or anti-social, on the contrary you may find  - like Lewis Carroll himself on whom the White Knight is based – that they love children because of their inherent curiosity and freshness of view and they are kind and gentle.  And they like animals because of their inherent innocence and loyalty.

Whilst rabbits build burrows and hide, hares make nests and do not hide.  The hare person is, despite their eccentricity, not a fearful nervous creature like a rabbit.  They may be shy but they are not without courage.  But they are not over bothered about where they live or how they live, their house will – if not managed by a partner – be a shambles.

Hare children are intellectually active from a very young age.  They are resourceful, independent and pretty eccentric even when young, with mad cap inventions and ideas, few entirely practical.

Hares are generally larger than rabbits, with longer ears, and have black markings on their fur. Hare people are often quite tall and in a rare few they too have large ears!

Hares have not been domesticated, while rabbits are often kept as house pets. There is a domestic pet known as the "Belgian hare", but this is a rabbit that has been selectively bred to resemble a hare. You cannot domesticate a hare person.  Left without a partner to tidy up after them they are disorganised and untidy.  They throw nothing away in case it comes in handy.  They leave little piles of ‘useful items’ all over the place in disorganised heaps .  There is apparently no reasoning for the grouping, but if any of the group should be inadvertently moved or [heaven forbid]  thrown away – it will be missed straight away.

[As you can see I am married to a hare person].